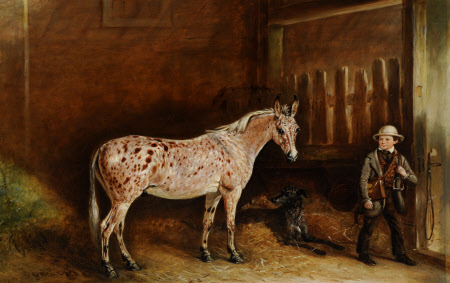 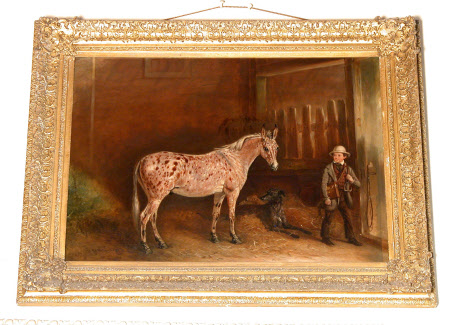 Oil painting on canvas, A Dappled Mule with a Boy and Greyhounds by John E. Ferneley (Thrussington 1782 – Melton Mowbray 1860), inscribed; 'Melton Mowbray' and dated 1850 and also inscribed; 'This picture was bought by Sir John Crewe Bt. for 10gns.' The mule stands in a barn interior two greyhounds lying in straw behind. A boy in a hat and carrying a saddle and stirrup walks towards the open doorway.

Bought by Sir John Crewe Bt for 10gns.; acquired with Calke Abbey's contents, with the aid of a grant provided by the National Heritage Memorial Fund, thanks to a special allocation of money from the Government and transferred in lieu of tax on the estate of Charles Jenney Harpur-Crewe (1917 - 1981) to the National Trust with the house that was given by Henry Jenney Harpur-Crewe (1921- 1991), in 1984