A Group of Ponies in the Park 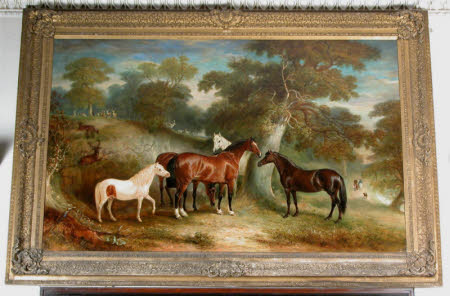 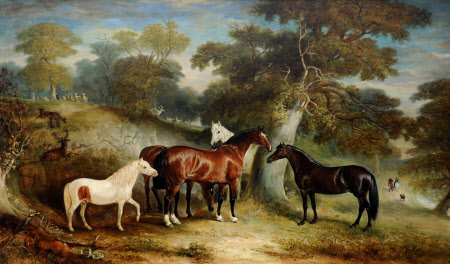 Oil painting on canvas, A Group of Ponies in the Park by John E. Ferneley (Thrussington 1782 – Melton Mowbray 1860), signed and dated, lower right: J. Ferneley/Melton Mowbray/1850. A group of five ponies is shown in a park, with deer in the left background and two people riding along a track in the right background. Three bay horses stand under a tree with a grey horse and a small skewbald pony. (Inventory card) This picture shows Ferneley at his most romantic although it appears to be an imaginary ensemble, the equine subjects were all portraits of animals belionging to Sir John Harpur Crewe 9th Bt. and painted at Calke. Isabel Harpur Crewe wrote 'Pictures of horses over the mantlepiece including little white pony saved from a wreck at Aldborough' (House Guide, last revised 1996).