'Goldfinder' a Bay Hunter with a Groom and other Horses 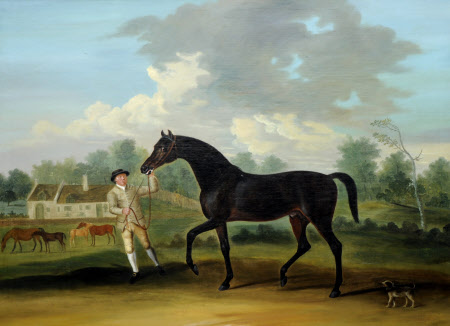 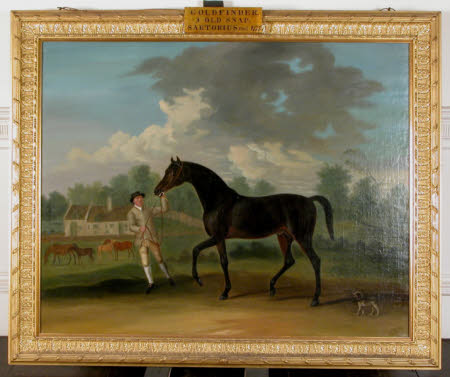 Oil painting on canvas, 'Goldfinder' a Bay Hunter with a Groom and other Horses by John Nost Sartorius (London 1759 - 1828), labelled: GOLDFINDER/and OLD SNAP/SARTORIOUS PINX 1777. A dark bay hunter is being held by a liveried groom in a field with other horses. The horse faces left and has two hooves raised, a small dog stands behind it. The groom wears a bowler hat, gold and blue striped jacket and gold breeches with white stockings. Behind him are some cottages and two mares standing with their foals. Frame John Nost Sartorious came from a Nuremberg family of painters, several of whom specialised in horses. Three works by him are at Calke). The three horses, 'Goldfinder', 'Trentham' and 'Fleacatcher', belonged to Sir Charles Sedley of Nuthall Temple near Nottingham, and these paintings may have come to Calke after his death in 1778. "Goldfinder", by "Snap" out of a mare by "Blank", was foaled in 1764. He ran all his races at Newmarket between 1768 and 1770 and was never beaten. He broke down in training before taking on "Eclipse" in the King's Plate and became a stallion at Sir Charles Sedley's stud at Nutall Temple near Nottingham, precisely the location of this picture.