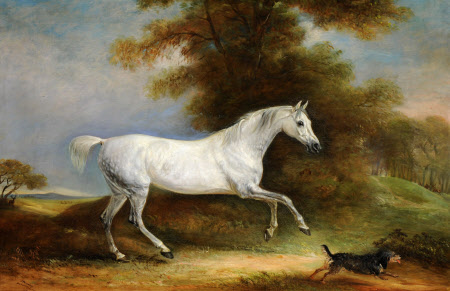 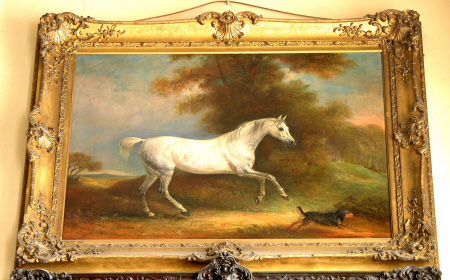 Oil painting on canvas, A Dappled Grey Hunter called 'Spangle' and a Terrier called 'Reveller' by John E. Ferneley (Thrussington 1782 – Melton Mowbray 1860), signed and inscribed 'Melton Mowbray 1843. The dappled grey horse is trotting through a landscape to the right with a terrier called Reveller running alongside and slightly in front. Large tree in the centre with distant horizon on the left with cloudy blue sky and pink and blue sky on the right.

Bought by Sir George Crewe for 10 guineas'; acquired with Calke Abbey's contents, with the aid of a grant provided by the National Heritage Memorial Fund, thanks to a special allocation of money from the Government and transferred in lieu of tax on the estate of Charles Jenney Harpur-Crewe (1917 - 1981) to the National Trust with the house that was given by Henry Jenney Harpur-Crewe (1921- 1991), in 1984