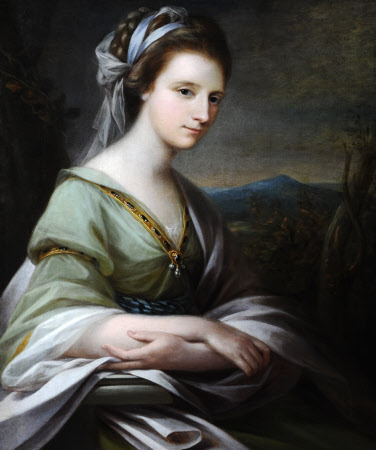 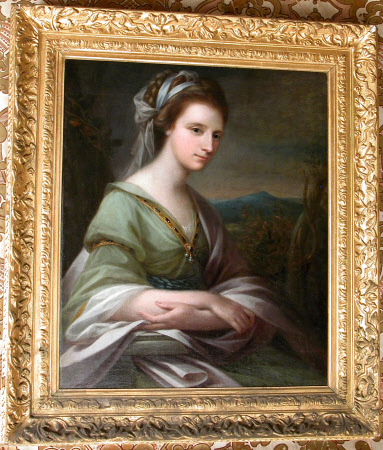 Lady Frances was the daughter of the 1st Earl of Warwick. She married Sir Harry Harpur, who owned Calke Abbey, where this picture still hangs, in 1762. She is depicted as a muse rather than an English gentlewoman.

Oil painting on canvas, Lady Frances Greville, Lady Harpur (1744-1825) after Angelica Kauffman RA (Chur 1741 – Rome 1807), inscribed on the back, 'Angelica Pinx/1767'. A half-length portrait seated, turned to the right, gazing down to the right, with her arms crossed in front of her. She wears a green dress. Landscape setting. Lady Frances, daughter of the 1st Earl of Warwick, married Sir Harry Harpur in 1762. She is depicted as a Muse rather than an English gentlewoman. Bettina Baumgartel, Head of the Angelika Kauffman Research Project, following a visit to Calke, has concluded that the picture is after a lost original by Kauffman (see her email of 25th April 2015, Pictures and Sculpture Curator archives). She wrote that "it is an old copy done during her living times [sic], the inscription on the back is not by Kauffman's hand. She never used only her surname "Angelica" [sic]. Moreover the handwriting, colours and technological details don't correspond with Kauffmann's typical manner ... We have also seen the copy in the housekeeper's sitting room, this is much later done on paper ..."

Angelica Pinx/1767 (inscribed on back)