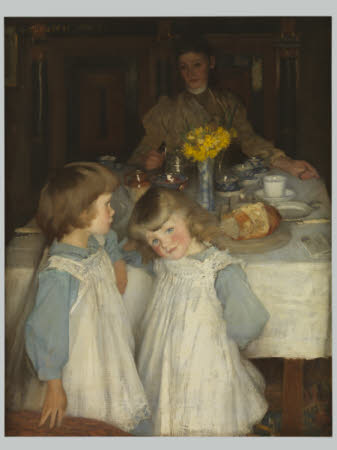 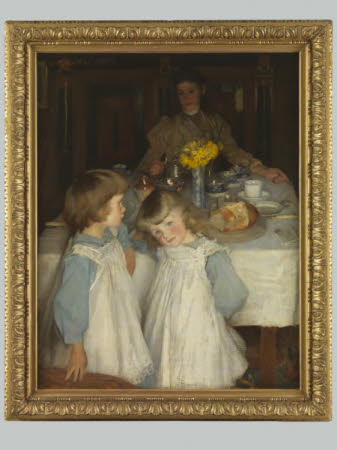 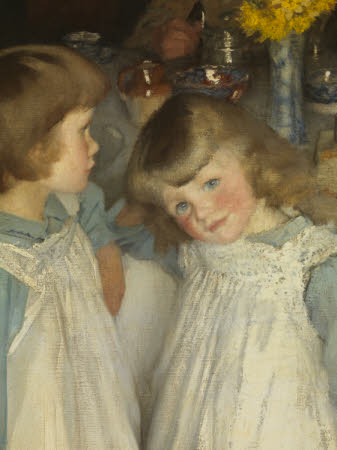 Oil on canvas, The Breakfast Table, by Sir George Clausen, RA (1852-1944), 1891-2. The painting depicts Clausen’s wife, Agnes Mary, seated at a table, her right hand holding the handle of a silver coffee pot, and their two daughters, Meg and Kitty, similarly dressed in light blue blouses and white pinafores in the foreground. The table is set for breakfast with blue and white porcelain dishes, a vase of flowers, and at the right corner, a loaf of bread and a stamped envelope and letter. For associated frame see NT 2900304.

Over the winter of 1890–1, George Clausen created this depiction of his wife Agnes Mary and their two daughters Meg and Kitty. The Breakfast Table marked a temporary departure from Clausen’s figure and landscape scenes of rural life. During the 1890s, Clausen was influenced by the French Impressionists, becoming preoccupied with the play of light and shade. In this domestic interior, morning sunlight falls over the table catching the glaze on the blue and white porcelain. In 1891, the painting was shown at the Royal Academy as Portrait Group. Originally a somewhat larger work it contained a portrait of Clausen’s eldest son, Arthur George, standing to the right of the table. The family group was criticised as ‘weakly designed’ and Clausen subsequently removed the portrait of his son. Born in London, George Clausen’s artistic talent was encouraged by his Danish father. A scholarship at the National Art Training Schools in South Kensington was followed by a brief period of study in Antwerp and Paris. He is primarily known for his figure and landscape paintings of scenes of rural life including The Girl at the Gate (Tate) and The Stone Pickers (Laing Art Gallery, Newcastle). In 1908, Clausen was elected a Royal Academician. The Royal Academy holds a number of his sketchbooks and a self-portrait and pendant portrait of his wife (c.1882). It seems possible that he painted the portraits to celebrate the occasion of his marriage. Fellow artist and friend Charles Ricketts wrote in his diary ‘to dine with Clausen, who has five grown up children, all of them good looking and happy. He seems a horribly domestic creature, full of regard for olds friends, and obviously a happy nature in happy circumstances’. During the First World War, Clausen produced a number of large-scale allegorical works. Youth Morning of 1916 (Imperial War Museum) is his moving response to the horrors of the war and, in particular, the death of his own daughter’s fiancé. The nakedness of the crouching figure and the starkness of the barren landscape emphasise the grief and emptiness of death surrounding her. In 1925, Clausen was asked to contribute to a mural scheme to decorate St. Stephen’s Hall in the Palace of Westminster. Fellow commissioned artists included Robert Anning Bell, whose work is also represented in the collection at Standen. The Breakfast Table is displayed near works by fellow artist friends including William Nicholson (his portraits of James and Margaret Beale hang in the Staircase Hall), Stanhope Alexander Forbes and Henry Herbert La Thangue. Another contemporary of Clausen’s was Arthur Melville; his watercolour of Standen hangs in the Business Room. Clausen and Melville knew each other and were in correspondence through their mutual friend, Robert Macaulay Stevenson. (Alice Strickland, 2018)

By descent in the artist's family; bequeathed to the National Trust by Jane K. Smith, the artist's granddaughter, 2018.