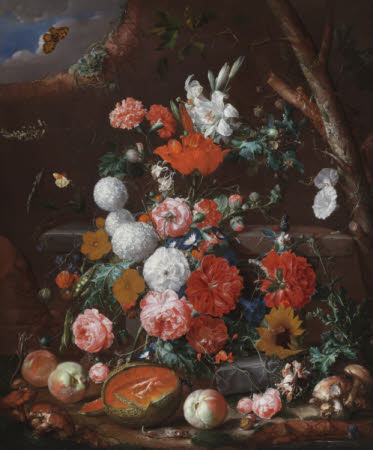 A profusion of brightly-coloured flowers and fruit – caught in a brilliant ray of light – is arranged by a stone seat in the corner of a garden. Slugs and snails slide by in the foreground and butterflies flutter above. This vibrant picture, probably painted around the time of the Dutch King William III’s accession to the English throne, was originally owned by his Secretary of State, William Blathwayt of Dyrham Park.

Oil painting on canvas, A Still Life of Flowers and Fruit arranged on a Stone Plinth in a Garden by Cornelis de Heem (Leiden 1631 – Antwerp 1695), c.1685, signed on the edge of the stone ledge, middle right: C. DE.HEEM.

Probably acquired by William Blathwayt (?1649–1717) in late 1680s; in the 1703 house inventory of Dyrham Park, when it was hanging in the “Great Roome above Stairs” [1839 - Cedar Drawing Room]; J. R. W. Blathwayt, Esq., of Dyrham Park, Gloucestershire; his sale, Sotheby’s, 29 February 1956, lot 44, sold for £1250, bought Leonard Koetser (dealer) and exhibited in ‘On Land and Water’ at Leonard Koetser Gallery, London, March 1965; private collection, England, 1965-2013; Johnny van Haeften Ltd. (dealer), 2013; bought by the National Trust with funds from the National Heritage Memorial Fund, the Mr and Mrs Kenneth Levy bequest, the Art Fund, a fund set up by the late Hon. Simon Sainsbury, the Royal Oak Foundation and a private donation, 2015.