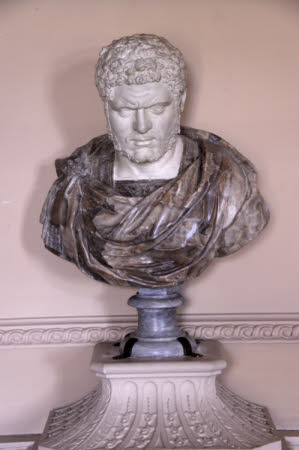 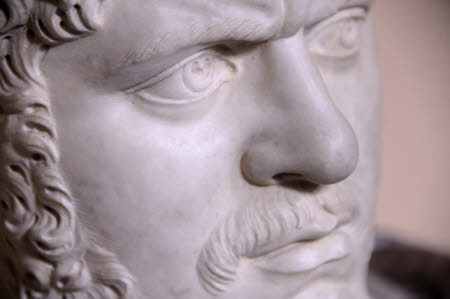 Carrara and grey marble and onyx

Carrara and grey/polychrome marble, Emperor Caracalla, Emperor of Rome (188–217), after the Antique, Italian, 17th century. A portrait bust of the Roman emperor Caracalla who ruled between 211-217 AD. This is the ‘frowning type’, from the Farnese Caracalla, much admired in Rome. Examples were recorded by Aldrovandi in five Roman palaces in the 16th century.

At Wimpole Hall at least by circa 1777, when the artist-clergyman the Reverend Thomas Kerrich made a brief list of pictures and sculpture in the house, noting ‘4 Antique Busts—one is Caracalla’ in the Gallery; introduced by Philip Yorke, 2nd Earl of Hardwicke, PC, MP, FRS (1720-1790) although they may equally have been acquired by Edward Harley, 2nd Earl of Oxford (1689-1741) who had a strong predilection for antiquities; by descent until sold with the house to Thomas Agar-Robartes, 6th Viscount Clifden, 1894; sold with the house to Captain and Mrs George Bambridge, 1938; sold from Wimpole around 1950; with Collins and Clarke, 81 Regent Street, Cambridge; purchased by Professor Sir Albert Richardson, probably on 25 February 1951; offered for sale at Christie's, King Street, London, 18 september 2013, lot 146 (together with a bust described as of the emperor Galba), remaining unsold; purchased by the National Trust by private treaty with the help of grants from the Art Fund, from a fund set up by the late the Hon. Simon Sainsbury, the Mr and Mrs Kenneth Levy bequest and other gifts and bequests, 2014.