The Hare - a study for 'The Forest' tapestry 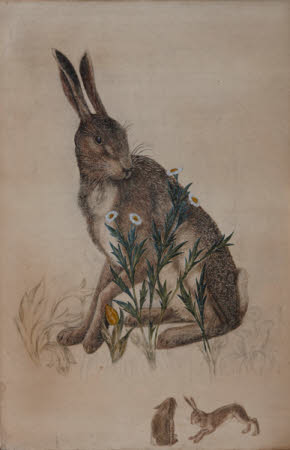 Pencil and watercolour on paper

Architect, artist and designer Philip Webb (1831–1915) worked closely with his friend William Morris (1834–96), and these four charming animal studies were used in the design of a tapestry known as ‘The Forest’, made by Morris & Co in 1887. The drawings of the hare and the fox demonstrate Webb’s subtle draughtsmanship and eye for detail, while the drawing of the raven perched upon a branch appears keenly observed from life, reflecting Webb’s interest in natural history. The lion, with its perfect mane, curled tail and paused stance, appears more naive in style. These drawings, along with another of a peacock, were scaled up to be turned into patterns, known as ‘cartoons’, which were used by the tapestry makers. The incorporation of spreading leaves, foliage and native wild flowers adds colour and vibrancy to the finished tapestry design (now in the V&A).

Watercolour and pencil on paper, The Hare by Philip Speakman Webb (Oxford 1831 - West Sussex 1915), 1886. A preparatory study for 'The Forest' tapestry designed by William Morris, Philip Webb and John Henry Dearle, and woven at Merton Abbey by William Knight, John Martin and William Sleath, 1887, by Alexander 'Aleco' Ionides, and hung in the study of his London residence, 1 Holland Park, now in the collection of the Victoria & Albert Museum, London (inv.no. T.111-1926). A pencil and watercolour study of a hare, seated, looking directly at the viewer, the head turned slightly, its proper left forelimb slightly bent and raised. The hare is seated amongst wild tulip, daisy and corn camomile. Below right are two smaller versions of the same animal. The tapestry motif of trailing acanthus is drawn in pencil by the forefeet and lightly traced around the animal at right. Further studies of a seated and hopping hare are at bottom right. With traces of pencil gridlines for scaling up. The study is one of a set of four (originally five but the whereabouts of the study of the peacock is unknown); see NT 2900066.1, 2900066.3 – 2900066.4.

The Forest tapestry was a collaboration between William Morris (1834-1896) and his friends and fellow designers Philip Webb and Henry Dearle (1859-1932). Webb and Morris met whilst working in Oxford for the architect G.E. Street. They were kindred spirits who shared a deep love of nature and the English countryside. Their creative partnership led to the founding of the visionary furniture and decorative arts firm, Morris & Co. The Forest depicts a peacock, a hare, a lion, a fox and a raven against a plane of lushly verdant acanthus. An array of wild and native flowers line the foreground. Verses contained within two scrolls run across the top of the tapestry, reading ‘The beasts that be in woodland waste, now sit and see nor ride nor haste’. The rich colours, patterns and textures were inspired by medieval tapestries which Morris so admired, the swirling acanthus by large-leaf verdure hangings woven in France and Flanders in the 16th century. These beautifully observed and highly finished pencil and watercolour studies were made in 1866, the Fox dated to Michaelmas Day of that year. They reveal the influence on Webb of the engraver and natural historian Thomas Bewick (1753-1828), whose portrait of a raven is especially close to Webb’s. Albrecht Durer (1471-1528) is recalled in the Hare and the Lion and the botanical accuracy of the native plants and flowers show Webb’s commitment to the Ruskinian ideal of ‘truth to nature’. The studies are faintly traced over with gridlines, indicating that they were scaled up for the cartoon. Woven at Merton Abbey in 1887 by Morris’ senior weavers, the tapestry was purchased by Aleco Ionides (1810-90) and hung at 1 Holland Park, before being sold to the Victoria & Albert Museum in 1926. Webb’s drawings appear to have been retained by Morris & Co. until about 1900, when they were sold to Laurence William Hodson (1864-1933), a brewery owner, for £100. In the 1890s Hodson had appointed Morris & Co. to refurnish his home, Compton Hall, on the outskirts of Wolverhampton. The estate was sold in 1906 but the drawings remained with the family. In 2013 they were offered for sale and were purchased for Wightwick Manor, a Wolverhampton manor house filled by the Mander family with Morris & Co. fittings, fabrics, wallpaper and furniture.