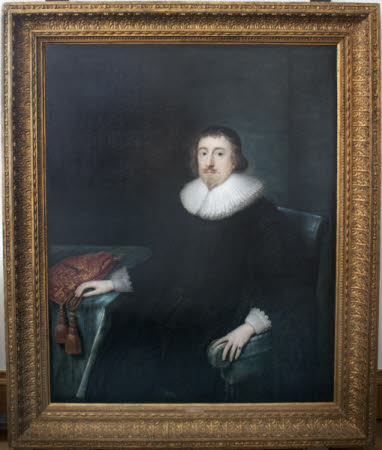 Oil painting on canvas, Sir Thomas Savage, 1st Viscount Savage (1586 - 1635) by Cornelius Johnson (London 1593 - Utrecht 1661), signed and dated 1632. A three-quarter-length portrait, of Sir Thomas Savage, who inherited Melford Hall in 1602, seated, with stylish beard, in black silk robes of office (with the purse of office) as Lord Chancellor to Queen Henrietta Maria, against an acqua-green background. The richly-embroidered purse of office on the table clearly bears the cypher 'HMR' ('Henrietta Maria Regina'), indicating that the sitter was the Queen's Chancellor which Thomas Savage held from 1627 until his death in 1635.

The lot description in the Christies South Kensington 11 April 2013 catalogue notes the following: ‘This portrait, which was long thought to represent John Williams, the Archbishop of York, and Lord Keeper to James I during the 1620s, has now been conclusively identified by Dr John Adamson (Peterhouse, Cambridge) as depicting Sir Thomas Savage, 1st Viscount Savage, in his robes of office as Chancellor to Queen Henrietta Maria. The previous identification of the sitter as John Williams was probably perpetuated by an engraving after the present work by Robert Dunkerton, dating to 1814, held at the National Portrait Gallery, which erroneously labels Williams as the sitter. But the richly-embroidered purse of office on the table clearly bears the cipher 'HMR' ('Henrietta Maria Regina'), indicating that the sitter must be the Queen's Chancellor, an office that Williams in fact never held. Rather, the position was occupied by Sir Thomas Savage from 1627 until his death in 1635, and this portrait would appear to date to around 1630-32. The work can be compared to another painted likeness of Savage, a full-length portrait held at Allerton Castle in North Yorkshire, which shows him in coronation robes, and was most probably executed to commemorate his elevation to the peerage in November 1626. The present lot renders Savage at an older age, after he had acceded to the chancellorship in 1628, and his neatly trimmed facial hair is notably cut in the style fashionable at court during the 1630s; similarly styled beards can be seen in other portraits of the period. The present work not only solves the riddle of the sitter's identity, but expresses a key connection between Savage, who was an important courtier and a friend of the Duke of Buckingham, and Henrietta Maria. Dr Erin Griffey (University of Auckland) notes that the choice of fabric in the portrait is quite deliberate and rather unusual. In place of the more common red or dark green wool fabrics normally seen in Lord Chancellor portraits, a costly shimmering aqua-green silk is used here, a colour and a material that the Queen herself favoured.We are very grateful to Dr Adamson and Dr Griffey for their assistance in preparing this note, and to Karen Hearn for confirming the attribution to Cornelis Jonson upon first-hand inspection.'