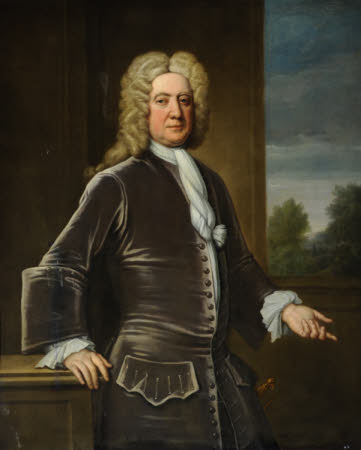 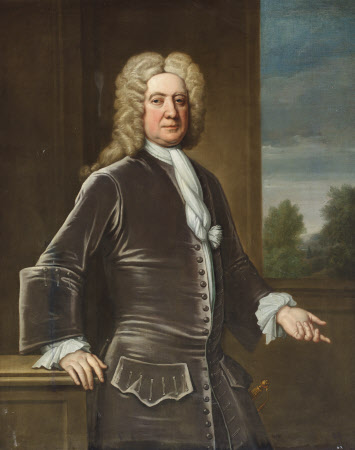 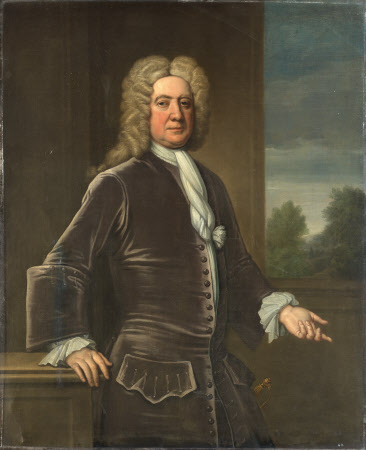 Oil painting on canvas, William Widdrington, 4th Baron Widdrington of Blankney (1678-1743), English School, 18th century. A three-quarter-length portrait, standing, in a grey velvet coat, at a casement, a view to a landscape beyond. The sitter was involved in the 1715 Rebellion and consequently had his estates and title forfeited. In 1718 he married Catherine Graham (1677-1757), coheir of Nunnington Hall. In the history of the Widdrington family's long standing Royalist alliance, William, 4th Baron Widdrington (1677/8-1743) had arguably the most dramatic involvement through his participation in the northern force's contribution to the Jacobite rebellion of 1715. For this action he was tried for high treason and sentenced to death in 1716 and granted a reprieve at the eleventh hour, though his involvement ultimately led to the forfeiture of his title and estates. He died at Bath on 19 April 1743 and was buried at Nunnington.

By descent in the Widdrington family of Newton Hall, Northumberland; purchased by the National Trust at the sale of the contents of Newton Hall through Christie's, South Kensington, on 20 January 2010, lot 264, with funds from gifts and bequests.