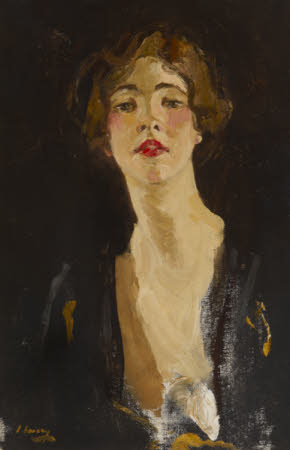 Oil on canvas board

Violet Keppel, whose mother was known to be Edward VII’s mistress, was a life-long friend of Vita Sackville-West. She first met her in London when she and her sister, Sonia, attended the same small school off Park Lane, Mayfair. Their relationship took a more romantic and passionate turn five years after Vita’s marriage to Harold Nicolson and the birth of her children, Ben and Nigel, and Violet's to Denys Trefusis in 1919. At the time this portrait was painted, their affair, which lasted tempestuously until 1921, was at its height.It is a rather intimate painting by the Belfast-born, Glasgow-educated society portrait painter who had been an official First World War artist for which he had recently been knighted. It seems to echo the words hat Violet wrote to Vita in the same year: 'Cast aside the drab garments of respectability and convention, my beautiful Bird of Paradise, they become you not. Lead the life Nature intended you to lead.'

Acceptanced in lieu of inheritance tax by HM Government and allocated to the National Trust for display at Sissinghurst Castle, April 2010.