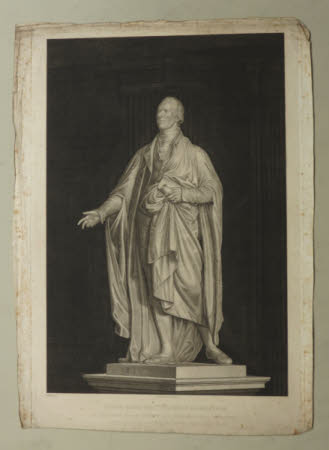 Print, A Statue of The Rt. Hon. William Pitt the younger MP (1759-1806) by Nollekens by John Kirby Baldrey (1750 - Hatfield 1873). A print of the statue of Pitt in the Senate House at Cambridge by J. Nollekens. Dedicated to Viscount Palmerston by J.K. Baldrey and marked 'Proof'.A statue of William Pitt by Nollekens, as if speaking, holding a scroll, on a pedestal inscribed with his name, from the Senate House, Cambridge, dedicated to Viscount Palmerston. Mounted on paper.