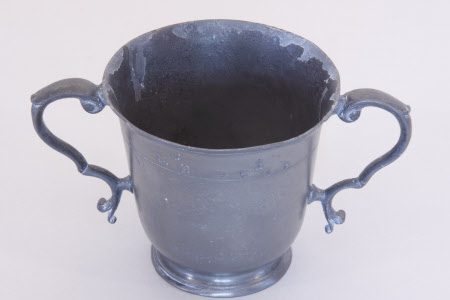 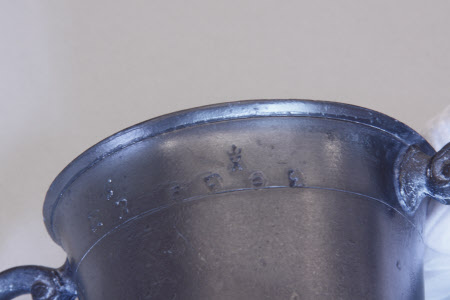 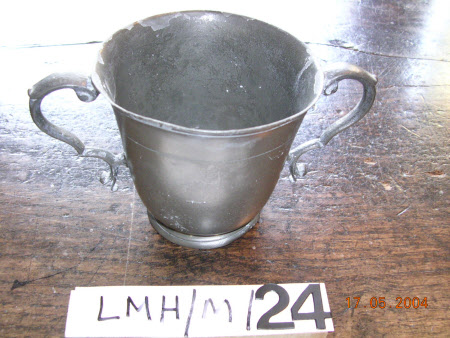 This double-handled pewter cup is also known as a 'loving cup' due to the two handles which enable it to be handed from person to person. By the 18th Century, the rich dined off pewter plates, whilst the poor still used wooden trenchers. However, given the choice nowadays, we would probably chose to use a trencher, since we now know that pewter is poisonous!

Pewter cup, double-handled (or loving cup) with cylindrical body flared at rim and tapering slightly to moulded base. Handle 'double curved' with recurved terminal (fishtail) attached to body by short struts or bosses. Early 18th century. Marks below rim (very worn) show a triad S/?-B crowned X, and remains of four hallmarks which correspond with the first four of the six used by W. Baldwin of ? (Cott.213). The initial(s) of the original or one-time owner appears on some pewter pieces in the form of a triad - as here on the loving cup (the only piece in the Little Moreton Hall collection with such a triad - unless the initials W M on the dish LMH/M/6 are the remains of a triad). The top initial is that of the surname, the lower left is that of the husband and the lower right that of the wife. In this instance, S represents the surname of the owner, B represents the initials of the wife, and the husband's initial is not identifiable (R. Coward's report has a ? where the husband's initial should be).