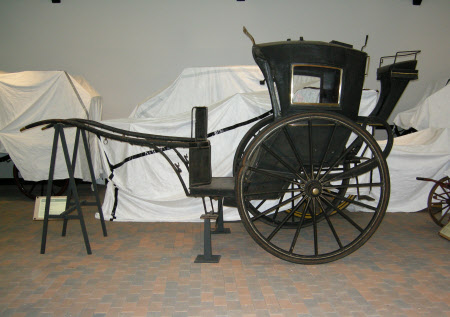 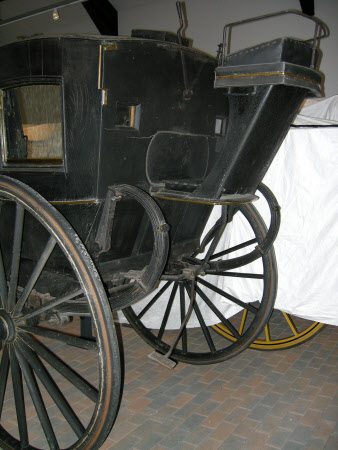 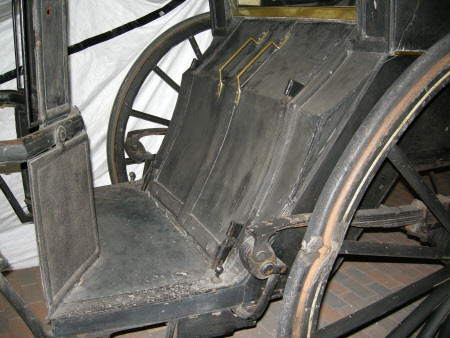 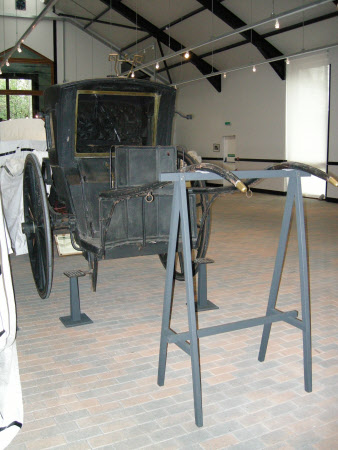 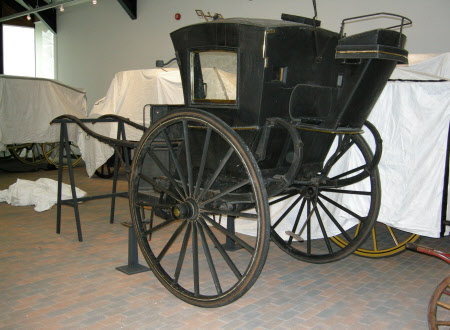 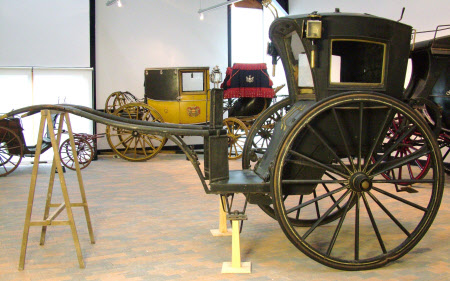 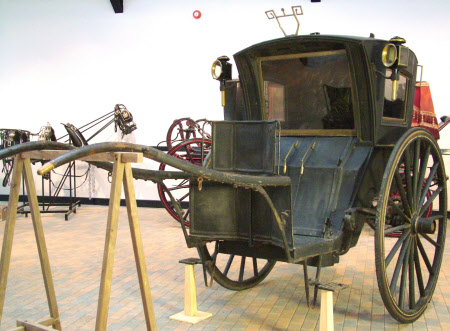 Hansoms immediately conjure up images of traffic-packed, smog-filled Victorian London, and Sherlock Holmes. The first Hansom cab was designed in 1834 by Joseph Hansom of York. Privately owned, hansoms had a racy and disreputable image. They competed for trade with four-wheeled cabs, which were regarded as safe and respectable. A middle class lady would never travel alone in a hansom.

Hansom Cab built by Forder of London and Wolverhampton circa 1900. Hansom Cab (two wheels) for a single horse. This cab, No. 5557, was one of the last to be used in London circa 1936/1937. The body is sprung on semi elliptic springs and has a pair of candle lamps. Painted in black livery with sparse white stripe with minor spoke detailing (also white).

This hansom cab is s very fine example by a builder who was recognised as the premier builder of this carriage type. It is of typical construction but built to highest standard. The first Hansom cab was designed in 1834 by Joseph Hansom of York, but it had little in common with the highly successful and long-lasting design that appeared two years later. Hansoms, the “gondolas of London”, immediately conjure up images of traffic-packed, smog-filled Victorian London, and Sherlock Holmes. They competed for trade with four-wheeled cabs, which were regarded as safe and respectable, whereas hansoms had a racy and disreputable image. A middle class lady would never travel alone in a hansom. The cabman drove from a high seat behind the body, from which he had a good view of the traffic, and hansoms were more manoeuvrable, and therefore faster, than the four-wheelers in the ever more congested city streets. There is a roof hatch for passengers to communicate with the cabman and to pass their fare to him, and a handle with which he could open the doors when he had received it. His position behind the body also helps to balance the carriage. Without him there the carriage is front-heavy and the load would be transferred through the shafts onto the horse. The steps are mounted on gravel irons which support the cab when the horse is taken out. This carriage was built, probably around 1900, by Forder & Co. Ltd. London and Wolverhampton, the premier builder of hansom cabs, and was used until the 1930s. It is on loan from the Bristol Industrial Museum. It suffered some damage to the body and one wheel when the Bristol City Museum was bombed during the Second World War.

Generously transferred to the National Trust by Bristol City Council in 2018. The carriage was previously on loan to the National Carriage Collection from 2003 to 2018. Acquired by Bristol City Museum from Blaigraves, used carriage dealers in London. The Museum was bombed during the Second World War and the cab sustained shrapnel damage. It was displayed in the Museum from 1946 to 1978 when it was loaned to the Aysgarth Museum in Yorkshire until the autumn of 2003, when it was returned to Bristol for conservation before being loaned to The National Trust.