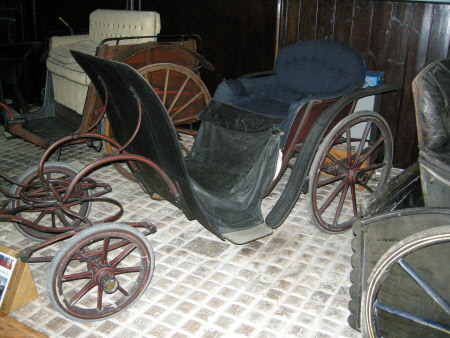 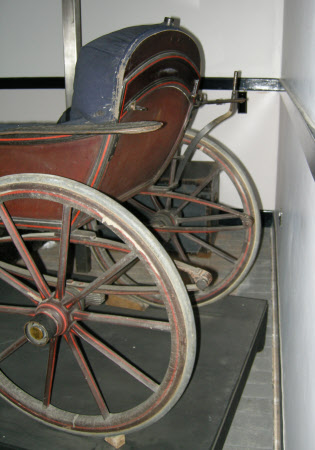 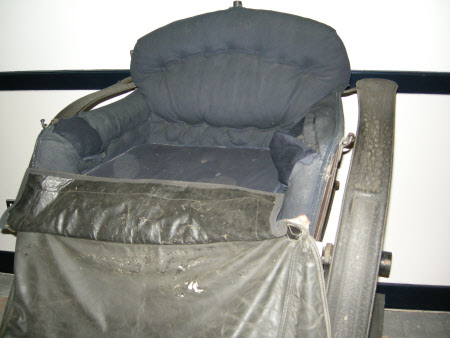 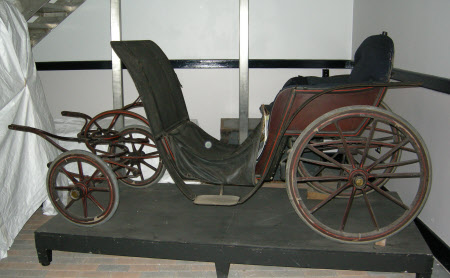 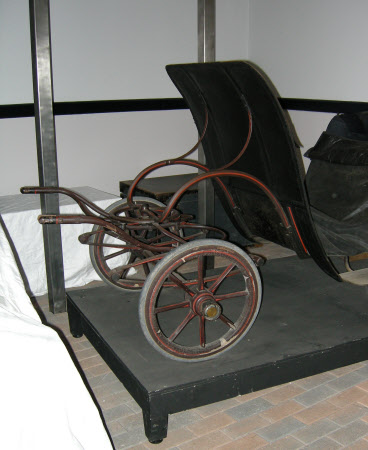 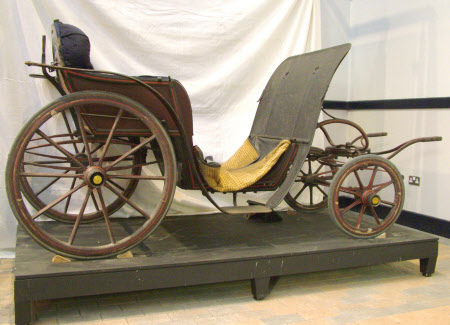 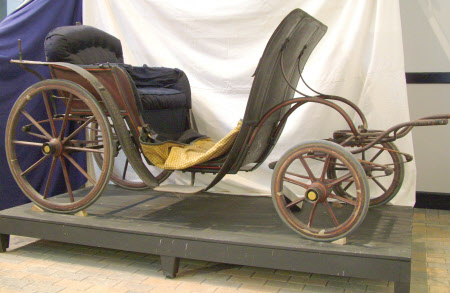 This carriage was used by Queen Victoria at Osborne House. The dash board was made higher than normal as the Queen felt it inappropriate to see her pony’s bottom! It is painted in the royal colours of maroon, lined bright red, and has the royal cipher on the side panels. The position of the brake lever shows that the attendant (perhaps even the celebrated John Brown) walked behind the carriage and could apply the brake when necessary. This carriage was built at the end of the 19th century by Cheverton, Newport, Isle of Wight and is on loan from The Science Museum.

Pony Phaeton built by Cheverton, Isle of Wight for Queen Victoria in 1893. Pony Phaeton (four wheels) for a single pony. With a single seat, the carriage has an angular cut-under body and convex back panel and still has its original fitted leather apron. The sockets on the waist rails and bolts on back of the body for the leather head have been removed. The 8 and 10 spoke English pattern wheels have rubber tyres and elliptic springs are fitted front and back. The very simple forecarriage is made of iron and attached to the body by two elegant curved stays. Painted in maroon, lined bright red, and with a royal cypher on the side panels.

This little carriage – sometimes referred to as a pony bath chair - was built by the carriage builder Bird Cheverton of Newport, Isle of Wight, for Queen Victoria and was used by her at Osborne House. It is painted in the royal colours of maroon, lined bright red, and has a royal cipher on the side panels. The position of the brake lever shows that the attendant (perhaps even the celebrated John Brown) walked behind the carriage and could apply the brake when necessary. Queen Victoria owned several very similar vehicles, two further examples are in the Tyrwhitt-Drake Carriage Collection in Maidstone. There are numerous photographs of Queen Victoria in pony phaetons. The carriage was acquired by the Science Museum in 1936. It was part of a group of nine carriages presented to the Science Museum by Edward VIII in November just before his abdication. Although it was always used at Osborne House, after Queen Victoria died, the pony phaeton was moved to the mews at Windsor Castle. A letter from the Keeper of the Science Museum dated July 1938 records, “Last year through Erskine the Crown Equerry, I was allowed to select nine carriages from the Royal Mews (before Edward VIII put them under the hammer). I raked the BP and Windsor mews myself and Erskine said there was nothing of any interest left at Balmoral or Sandringham.”

The carriage was built for Queen Victoria and used by her at Osborne House on the Isle of Wight. It was donated to the Science Museum, London, in 1936 by HM King Edward VIII with several other Victorian Carriages. Lent by the Science Museum in 1979.

On all axle caps: CHEVERTON NEWPORT [italics]. I.W On the axle: W.T.SHORTHOUSE