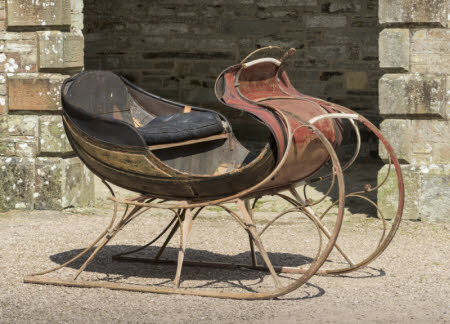 This sleigh, in original condition, is a type known as an Albany Cutter, named after the city in New York state where it was first designed by James Goold in 1813. It is a very elegant horse-drawn winter vehicle with a distinctive swell or rounded shape with high, open runners. Many British aristocratic families owned at least one American carriage towards the end of the nineteenth century. During that time this sleigh was at the Harewoods Estate at Outwood in Surrey, now owned by the National Trust.

Horse-drawn sleigh. Built by the American carriage builder J.Goold & Co probably during the second half of the 19th century. This type of sleigh is known as an Albany Cutter as it was originally designed by James Goold of Albany, New York in 1813. It has a distinctive swell or rounded shape and high, open runners.

The sleigh has open wooden runners with metal brackets. Swell shaped red painted front with black painted sides and back. Leather dashboard. Remains of interior carpet can be seen.