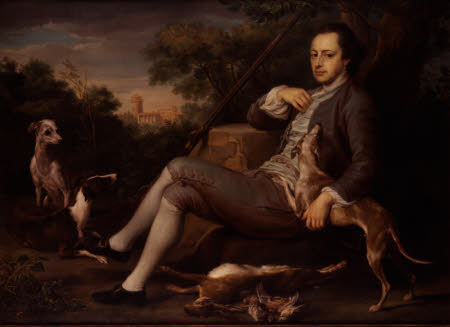 Batoni was one of the most sought after portraitists of his age, particularly amongst English aristocrats on the Grand Tour. Humphry Morice sat for Batoni during his second trip to Italy. He is shown reclining in a wooded landscape with his hunting dogs.

Oil painting on canvas, Humphry Morice (1723 - 1785) by Pompeo Girolamo Batoni (Lucca 1708 – Rome 1787), 1761/2. A full-length portrait, lying in the open air in a woodland setting with hunting dogs. He was a celebrated animal lover. This portrait is an autograph replica, signed and dated 1762, in the collection of Sir James and Lady Graham at Norton Conyers, North Yorkshire. Morice made three trips to Italy and it was on the second that he sat for Batoni in Rome. The Torre Leonina and the Torre dei Venti can be seen in the distance. He purchased Batoni's Diana and Cupid, now in the Metropolitan Museum of Art on 1 April 1762 and this picture was intended as its pendant. This is a unique composition for a portrait of the artist although popular amongst younger Grand Tourists. An oval half-length portrait of Morice is in the Wadsworth Atheneum, Hartford, Connecticut and may be the original sketch from life.