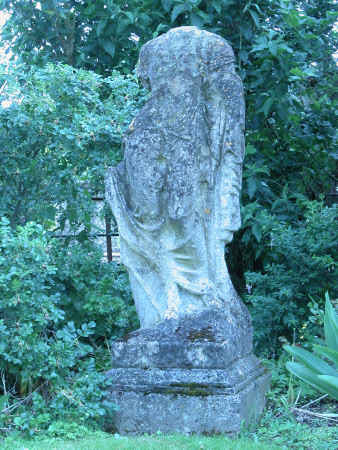 Stone, Farnese Flora. A loosely draped full-length stone figure of a woman (headless), standing on right leg, left bent and body curved, her drapery looped over each arm. Heads and arms missing. Worn. Antique statues of Flora were drawn three times by Marten van Heemskerck who was in Rome between 1532 and 1536. By 1550 they were recorded in the courtyard of the Palazzo Farnese, Rome by Aldrovandi and this original was restored by 1561. It was removed in 1787 for further restoration and sent to Naples in 1800 where it still is, in the Museo Nazionale as a Roman copy of a Greek statue if Aphrodite of the 4th century BC.