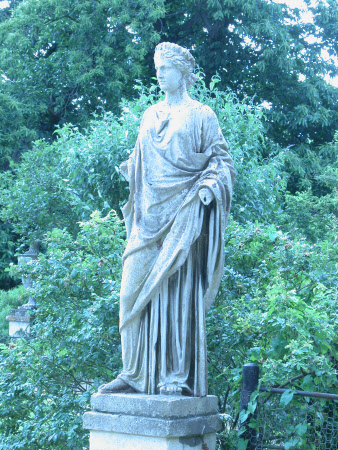 Stone sculpture, The Capitoline Flora. A classical woman standing on left leg, the right slightly bent, extending right hand as turns that way. Drapery falls over right shoulder and across over left arm and down in deep, sharp-edged vertical folds. Flower circlet in swept back hair. Sandals on feet which protrude from beneath dress. On rectangular base with shaped corners. Right arm missing below elbow, and left hand. The original marble statue of 1.68 m is in the Capitoline Museum, Rome and has been since 1744, although it was ceded to the French under the terms of the Treaty of Tolentino and went to Paris in 1798 but removed in 1815 and arrived back in Rome in early 1816, also known as Sabina, Polyhymnia.