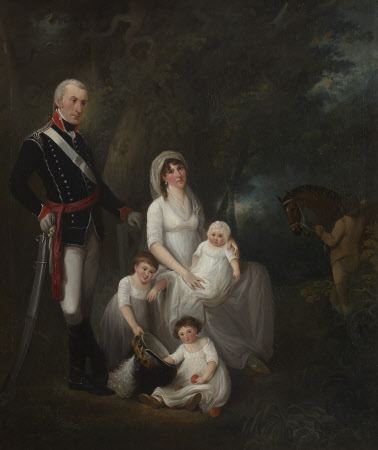 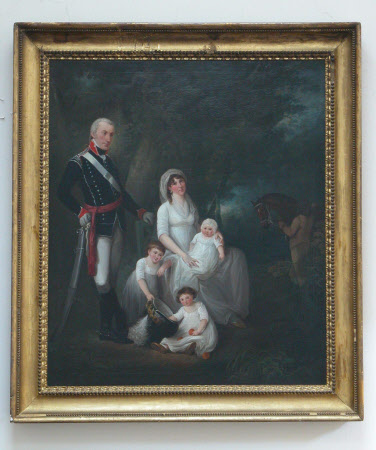 Oil painting on canvas, Lieutenant John Cave of the Bristol Troop of Gentlemen and Yeomanry Cavalry and his Family, British (English) School. Man in military uniform stands on the left next to woman seated beneath a tree, holding a baby. Two further children play at her feet with the officer's hat. A horse and groom stand in the background, to the right. The officer has been idenitified as Lieutenant John Cave of the Bristol Troop of Gentlemen and Yeomanry Cavalry. Cave took up his commission on 1 November 1797 and was still serving in 1800, though not by 1804, by which time the Yeomanry and Volunteers had been reorganised. The upturned helmet bears the inscribed letters ‘[…] LRY’, [i.e. ‘CAVALRY’] on the silver scroll above the peak. This identification of the subject with a position in a cavalry regiment points to the name of John Cave, rather than that of Adjutant Richard Cave, the only other person by the name of Cave to serve in a volunteer formation in the West Country at the time, who served in the Taunton Volunteers, an infantry unit. In gilt beaded, concave frame.