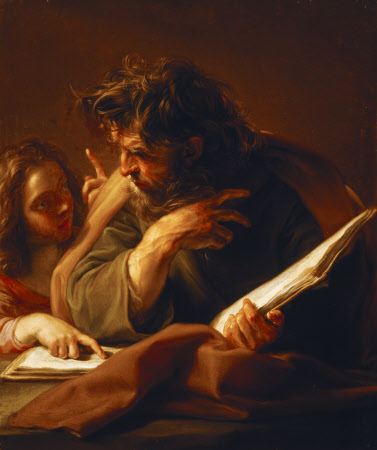 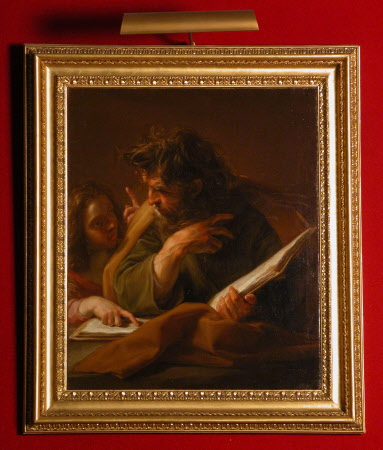 This Evangelist is from a group of eight pictures now in the Iliffe Collection at Basildon Park that comes from a set of twelve pictures of God the Father and the Apostles, originally painted for the town palace of Count Cesare and Fra Giuseppe Merenda in Forlí. They were Batoni's most dedicated patrons, commissioning at least 32 paintings from him between about 1740 and 1750. Saint Matthew holds a manuscript, embodying his Gospel, whilst his traditional symbol, an angel, indicates a passage in a book — standing for the Old Testament prophecies whose fulfilment his contribution to the New Testament reveals — whilst pointing to Heaven as the source of his inspiration.

Oil painting on canvas, Saint Matthew by Pompeo Girolamo Batoni (Lucca 1708 – Rome 1787), 1740-43. A half-length figure at a table on which he holds open book in left hand and rests right elbow with right hand held against him. Brown hair and beard, green tunic and orange/brown cloak. He looks at an angel, who is giving him divine inspiration to write his first gospel, on his right who points up with his left hand and with his right hand points on the book.Moulded gilt frame. Part of set with NT/BAS/P/12-14,17-20.