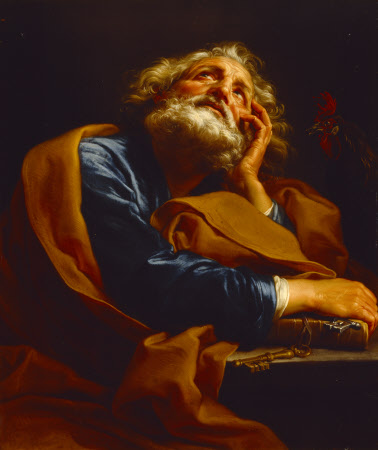 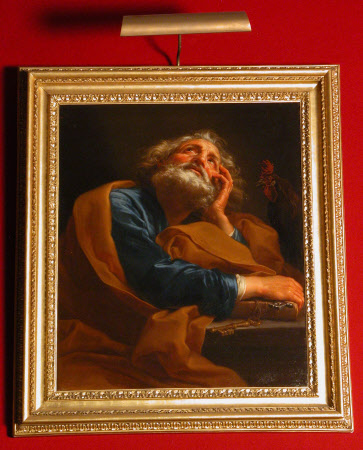 This founding figure of the Christian Church is from a group of eight pictures now in the Iliffe Collection, that comes from a set of twelve pictures of God the Father and the Apostles, originally painted for the town palace of Count Cesare and Fra Giuseppe Merenda in Forlí. They were Batoni's most dedicated patrons, commissioning at least 32 paintings from him between about 1740 and 1750. St. Peter holds a book, to symbolise his Epistles, and keys symbolic of the powers that Christ gave him to bind and unloose. The cock beside him stands for the one that crowed after he had denied Christ thrice.

Oil painting on canvas, Saint Peter by Pompeo Batoni (1708-87), 1740-43. Three-quarter length, turned to his right, eyes upwards, behind table on which left elbow rests and on which lies a book held by right arm, and two keys. Head with grey hair and beard rests in left hand. Blue tunic with brown cloak. Profile of cockerel at right. Part of set with NT/BAS/P/12,14,15,17-20.