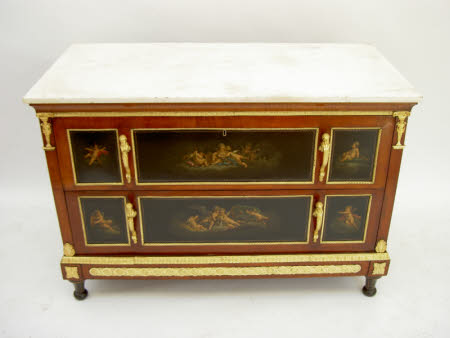 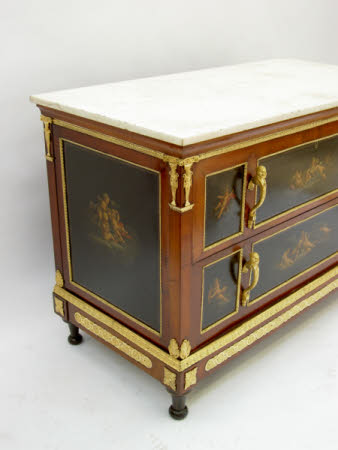 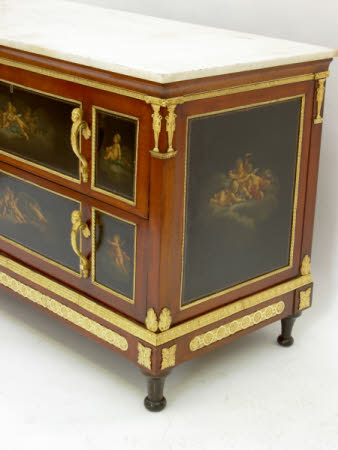 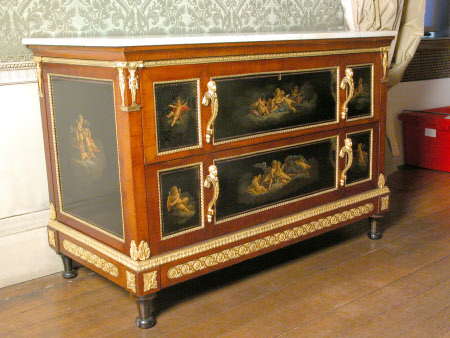 A mahogany and painted commode with rectangular Carrara marble slab, fitted with two long deep drawers, Berlin, c.1795. The very fine gilt bronze mounts comprise borders of chains and foliage surrounding the panels of each drawer, handles of terminal figures, and more chains and foliage bands with leaves and flowers on the base. The turned and tapering legs and bun feet are later replacements. The black lacquer panel depicting cupids at play on clouds have been attributed to the Stobwasser manufactory, founded in Brunswick in 1763 by Georg Heinrich Stobwasser (1717-1776) and established in Berlin since 1772/3. The manufactory’s technique was similar to Japanning in its imitating of Asian lacquer work. Stobwasser was particularly famous for its papier maché snuffboxes, several of which survive in National Trust properties, such as Angelsey Abbey (NT 517636) and Calke Abbey (NT 292453, 292460.1 and 292460.2). Both Charles I, Duke of Brunswick-Wolfenbüttel (1713-1780) and Frederick the Great, King of Prussia (1712-1786) were avid supporters and collectors of furniture and decorative art works produced by the manufactory. Two very similar commodes to the one at Basildon were recorded in the Schloss in Berlin prior to its destruction in 1945.

Acquired by Lord and Lady Illife and presented to the National Trust as ‘probably Russian, 19th century’ together with the house and grounds of Basildon Park in 1979.