'A Chelsea Interior ' (The Carlyles at Home with their Dog Nero at 5/24 Great Cheyne Row, London) 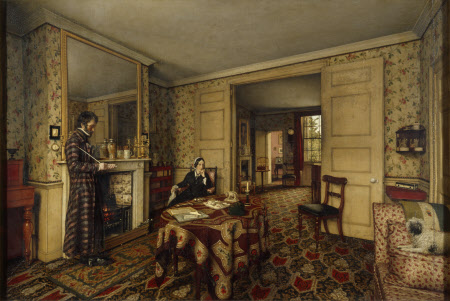 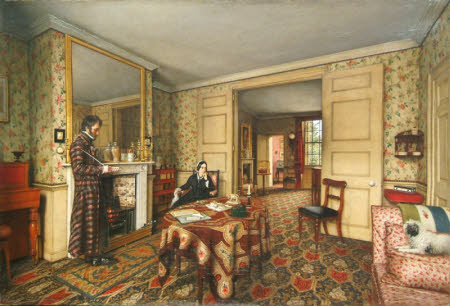 Oil painting on canvas, A Chelsea Interior (The Carlyles at Home with their Dog Nero at 5/24 Great Cheyne Row, London), by Robert Scott Tait (1816 - 1897), 1857-58. It depicts, in Tait's own words: "The ground floor of no. 5 Great Cheyne Row, Chelsea, the residence of Thomas Carlyle, Esq. (Author of "Sartor Resartus"; "The French Revolution: A History", "Letters and Speeche of Oliver Cromwell," - &c. &c.) with portrait of him, his wife, and also of Mrs Carlyle's little dog 'Nero'."

In the spring of 1857, the painter and photographer Robert Tait (exh. at the Royal Academy 1845-1875), 'a Dumfriesshire man from near Moffat, living in London, and frequenting the Carlyles', 'took the bright idea that a Picture of our sitting room would be amazingly interesting to posterity a hundred years hence'. After completing the work, the artist himself opined that the picture would keep his name alive, when better painters were forgotten. A hundred and forty years later, it is just as he said: the house whose sitting-room he portrayed was acquired by the Carlyle House Memorial Trust in 1895, and in 1936 passed into the care of the National Trust, to preserve for posterity the setting in which Thomas Carlyle wrote his most celebrated works; yet it is still this painting that yields the most evocative image of the Carlyles at home. Whilst Tait (though he also painted a conventional portrait of Carlyle, as well as copies of some of his favourite paintings - all of which are also at Carlyle House) is almost forgotten as a painter, and is known, if at all, as homo unius tabulae: this very picture. Even at the time, it was bought (by William, 2nd Baron Ashburton, whose first wife, Lady Harriet Montagu, who had died the year before, in May 1857, had lionised Carlyle to a degree that had provoked jealousy in Jane), after its exhibition at the Royal Academy in 1858, for the exceptional sum of £500 - 'just £495 too much', according to Carlyle himself; and it has been on loan to Carlyle House since 1894, (originally from Louisa, Lady Ashburton, second wife of the 2nd Baron, subsequently passing by inheritance to their only child, the Hon. Mary Baring, who was married to the 5th Marquess of Northampton, grandfather of the present vendor), so that it has itself become an historic element of that interior. Like many great births, its gestation was not without pain. In one of her inimitable rattling letters, to her friend Mrs. Russell, of 20 November 1857, Jane Carlyle wrote: "I little knew what I was committing myself to when I let him begin. - For the three months before I went to Scotland, he came and painted twice a week; while I was in Scotland he came four times a week; and for the last six weeks he has been over-standing me like a nightmare every day!! except when, please God, the fog is so black that he can't see. These lower rooms are where I have been always used to live at this season; and to keep up fire there, and in the drawing-room as well - besides in Mr C.'s study at the top of the house, is a great expense, when coals are seven and twenty shillings a cart-load; and is also a great trouble to one servant. So I have kept my ground hitherto; always hoping he would get done. But, my Heavens! he will make this great 'Work of Art' last him into 1860, I begin to think. A whole day painting at my portfolio! Another whole day over my workbox, and so on. Not the minutest object in these three rooms, opening into one another, but what is getting itself represented with Vandyke fidelity! And all the while the floor won't be flat for the life of him.... The dog is the only member of the family who has reason to be pleased with his likeness as yet." Confronted with the finished picture, she found fault even with this detail: "I wish Tait had not painted Nero as big as a sheep. That provokes me more than being transmitted to posterity in wrong perspective and with a frightful table cover".1. The seeming disproportion and jarring perspective were due to Tait's pioneering enlistment of photography as an aid to painting his picture (vide his note on the back of the picture regarding the correct viewing point for it). Over this, it was Carlyle who expressed his exasperation, in a letter to his wife in Scotland written on 16th July 1857: "Tait has been steaming about all day with his photographing (very malodorous) apparatus; and has bothered me five or six times: at length came Darwin (happily), and has just carried [him] away. But my day too is gone!" and ten days later: "Tait paints incessantly here, and seems to me to make no progress at all. He has brought back his malodorous Photographing Apparatus; was fluffing about, all Saturday with it, and getting views which will certainly 'please Mrs. Carlyle'." This painting is thus not merely a singular record of the Carlyles at home, but represents an episode in their lives, recorded by their vivid correspondence. 1. Jane Carlyle probably thought the table-cover 'frightful', because it was so obviously cheap. Ian Gow, Head Curator of the National Trust for Scotland, has kindly supplied a helpful note, explaining that it would appear to have been a Brussels-type table-carpet made by the method invented by Whytock of Eskbank (the patent later passed to Crossley of Halifax), in which the wool threads were printed in colour blocks before the carpets were woven. The same process was used for floor-carpets, and in the best Scots schemes (such as those advocated by D. R. Hay) these and other patterns were all 'scientifically' harmonised: such may also have been the Carlyles' - and Tait's - intention, in their 'Chelsea interior'.

Bought by William, 2nd Baron Ashburton; on loan to Carlyle's House since it was first opened to the public in 1896, originally from Louisa Steart-Mackenzie, Lady Ashburton, second wife of the 2nd Baron, subsequently passing by inheritance to their only child, the Hon. Mary Florence Baring, who was married to the 5th Marquess of Northampton, grandfather of the present vendor; purchased from the 7th Marquess of Northampton by the National Trust by private treaty for £120,000 with the help of the Art Fund and an anonymous benefactor in 1998

Verso: 'Painted by me Robert Tait/5 Queen Anne Street, London/Commenced 26th May 1857, and finished on this 5th April 1858. The proper point of sight is about 18 inches in front of the picture exactly opposite this *point. A near point of sight was thus adopted in order to get in as much as possible of the front room. The picture having been painted from the recess of one of the two windows in the front room, a spectator looking properly at the picture, sees everything in the interior as if her were seated in the said recess. R. Tait. * 1  to left (from front) of the dead centre of the picture Verso: and in Carlyle's hand: Correct likeness of the Ground floor of my London [?] house, Chelsea, March 1858, T. Carlyle.