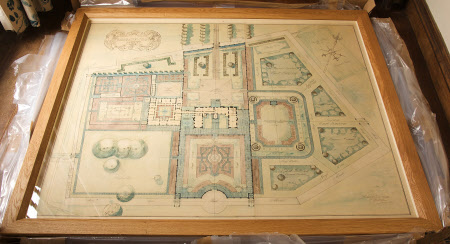 This plan in delicate watercolour tints is an excellent example of early 20th century artistic design. Created by J E Forbes, it outlines the ideas for transforming the garden which were further refined by Gertrude Jekyll. However, the proposed three gardens were not implemented due to concerns of diverting attention from the magnificent Tudor building.

Coloured plan, proposals for the garden, dated 1917 by Forbes and Tate. Inscribed 'For Lieut. Col. A Arthur Lyle' and signed 'Forbes and Tate, FFRIBA, 16 Old Square, Lincoln's Inns, January 1917'. Mounted behind perspex on to hardboard.