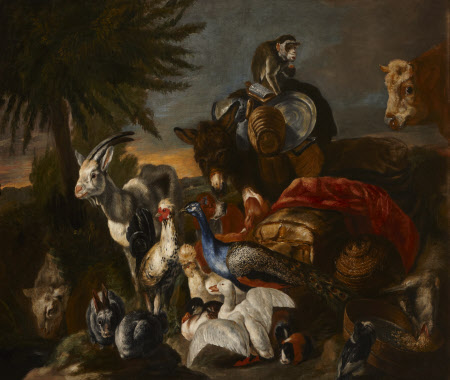 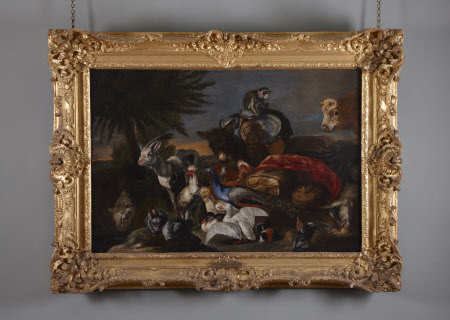 A troop of animals have halted on a journey in an exotic landscape. An eclectic mix of a monkey, a donkey, goats, birds including a peacock, rabbits and guinea-pigs gather together laden with household wares. A cow peeps in on the right. The scene evokes a biblical diaspora but are they travelling alone, or do they have a human companion, the artist himself perhaps?

Oil painting on canvas, An Animal Scene, attributed to Pieter Boel (Antwerp 1622 – Paris 1674). A peacock and other birds, goats, a donkey, rabbits and guinea pigs. The attribution to Boel, a pupil of Snyders and one of the best still-life artists of the later 17th Century, is a tentative suggestion of the Rijksbureau voor Kunsthistorische Documentatie (RKD). A similar scene is in the Musée de Soissons, France. The picture was formerly attributed to Jan Fyt and is hung as a pair with NT 247860.

On loan from Earl Castle Stewart