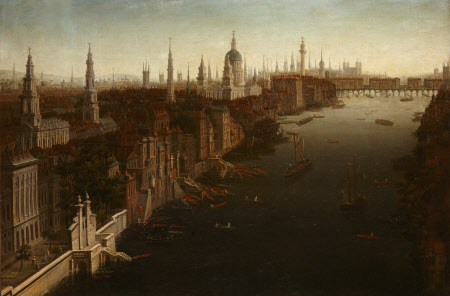 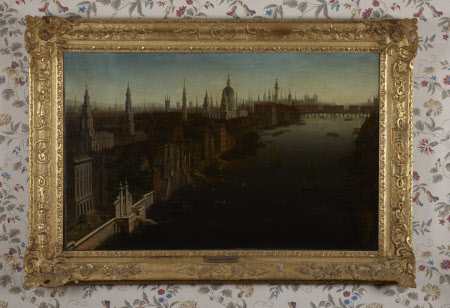 In this view of the River Thames, the crowded spires, monuments and rooftops of London take on an almost illusory quality. In the distance, the medieval structure of old London Bridge can be seen complete with its houses, prior to their removal in 1757. Along the north bank of the river, boats cluster around moorings where stairs lead to riverside mansions. In contrast, the south side of the river appears relatively undeveloped. In the foreground, the south facade of Somerset House with its terrace, formal gardens, and watergate occupies a prominent position. This riverside aspect of the house was popularised by Canaletto’s painting of around 1750, which is today in the Royal Collection. Attributed to Robert Griffier, this work is one of a pair (see NT 247856).

Oil painting on canvas, View of London with Somerset House, St Paul's Cathedral and Old London Bridge, attributed to Robert Griffier (London 1688 – London 1750). One of a pair with NT 247856. Both were previously catalogued as style of William Marlow (1740 - 1813) but the scenes depicted are too early for him. The houses were removed on London Bridge in 1758-62 and a single central arch created.

on loan from Earl Castle Stewart