The Angelic Guards (from Elysium, or the State of Final Retribution) 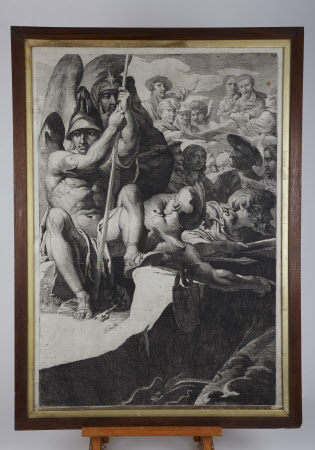 Engraving on paper in oak frame

Etching and line engraving on paper, The Angelic Guards (from Elysium, or the State of Final Retribution) by James Barry, RA (Cork 1741 – London 1806), 1795. One of a set of six engravings of scenes from: A Series of Etchings by James Barry, Esq. from his Original and Justly Celebrated Paintings, in the Great Room of the Society of Arts. Painted, engraved and published May 1st 1795 by James Barry, RA (Cork 1741 – London 1806). Professor of painting to the Royal Academy. One of the engravings is dated Feb. 28th 1793. Elysium, or the State of Final Retribution was the final part of the narrative of the sequence of 'The Progress of Human Knowledge and Culture' in the Great Room of the Royal Society for the Encouragement of Arts, Manufactures and Commerce. It shows Elysium, the Greek afterlife reserved for the virtuous, including scientists, philosophers and legislators.In the foreground is an angelic guard drawn from 'Paradise Lost', an archangel weighing an unseen object, and another angel who is explaining something to a group of theologians. Directly above in the background, is Homer, holding Orpheus' lyre and surrounded by Shakespeare, Milton and Chaucer. Far right is Barry's dark depiction of Tartarus, the Greek hell.