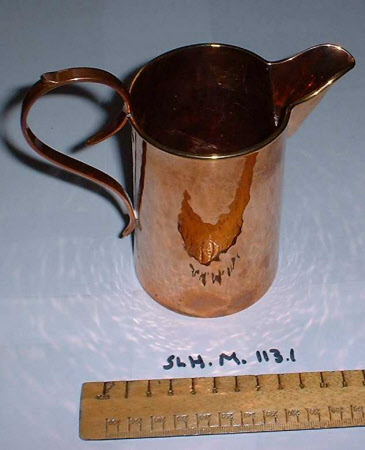 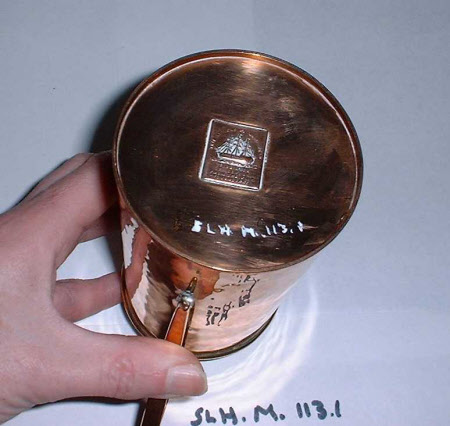 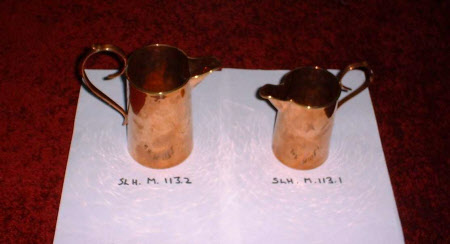 Souter and the Leas, Tyne and Wear (Accredited Museum)

Copper measuring jug, possibly for grog. Made from copper salvaged from HMS Foudroyant, a fact verified on the base. HMS Foudroyant was launched in Plymouth in 1798 and became Nelson’s flagship in the Mediterranean in 1799 after many years of active service she was converted to a training ship. In 1892, she was sold for breaking up to a German firm. Because of her association with Nelson, there was a public outcry and as a result was purchased by George Wheatley Cobb for twenty thousand pounds (his own expense) with a view for display at various ports and a sail training ship. She was wrecked at Blackpool in a gale on 16 June 1897. The salvage terms were that the company involved received two thousand pounds only if they re-floated her. If they failed, they could buy the wreck for ten pounds. The ship was unsalvageable and the company recovered some of their expenses by making souvenirs from the timber and copper.

on base-To be part of the copper from the Foudroyant. This article is warranted

END_OF_DOCUMENT_TOKEN_TO_BE_REPLACED

Souter and the Leas, Tyne and Wear (Accredited Museum) (1678)