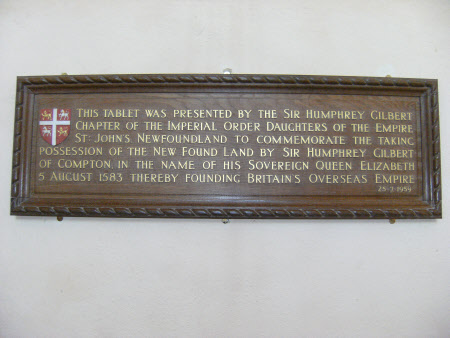 In 1583 an expedition of four ships commanded by Sir Humphrey Gilbert arrived in Newfoundland with a commission from Queen Elizabeth to sail the seas and take lands under her banner. Shortly after his arrival Gilbert set up his tent on a hill overlooking St. John's harbour, and solemnly read aloud his commission and formally took possession of the land in the name of the Queen. Newfoundland thus became England 's first possession in North America. It is said that the locals presented Gilbert with a gift of a local dog, whom he named Stella after the North Star.

given by the Daughters of the Empire to Commander Gilbert on 25th July 1959.