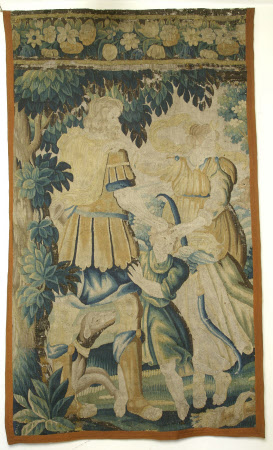 Tapestry wool and silk, Diana, Mars and Cupid, Flemish, probably Oudenaarde, c. 1580-1600. The boy Cupid, with wings and a bow, stands between Diana, identified by a crescent moon on her forehead, and a man in armour, possibly the god Mars. The tapestry would originally have formed part of a larger piece. There is a border of flowers and leaves at the top and an orange-brown edging applied around the other three sides.

Acquired by Edgar Graham Lister (1873-1956) for Westwood Manor, and bequeathed by him with the house to the National Trust