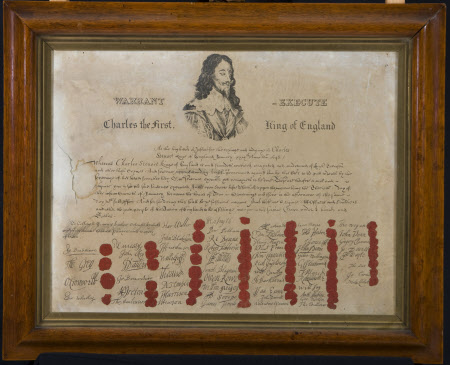 When Cromwell visited Ireland in the 1650s, he brought copies of Charles I's death warrant with him to prove that the king was indeed dead. Cromwell had appointed the first William Conyngham, the Colonel William Conyngham who purchased the estate, a Commissioner. There are few copies of the Death Warrant around in England as many families would have disposed of their copy when Charles II ascended the throne. Perhaps in Ireland the Conynghams didn't feel the same risk? The death warrant is a fascinating topic in itself, 135 men were nominated to try the king, but only 68 turned up to the court proceedings and only 59 men signed, with some later claiming pressure from Cromwell.

Reproduction of Warrant to execute Charles 1.