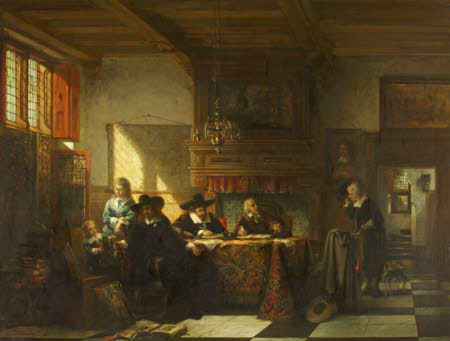 Oil painting on canvas, Rent Day, Dutch Clerics in the Voorhuis by Johannes Anthonie Balthasar Stroebel (The Hague 1821 – Leyden 1905), signed and dated '72 [1872]. A 19th century interpretation of a Dutch interior scene in the 17th century of Dutch clerics in the front part of a house.

Purchased from Goupil 1875 for £280; purchased by the National Trust from the estate of the late George Richard Lawley Gibbs, 2nd Baron Wraxall (1928 – 2001) with the assistance of the NHMF, Art Fund and donations from members and supporters in 2002