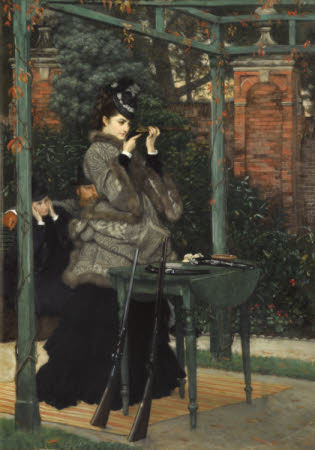 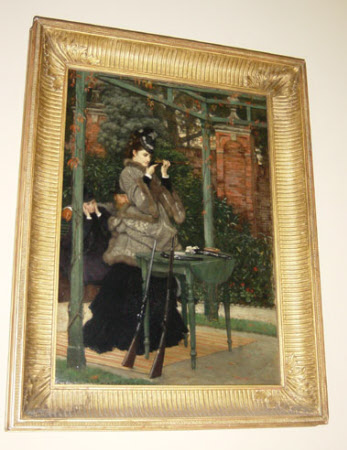 This is the earliest of Tissot's pictures to have been painted in England, and it is exceptional for him in showing an active, independent woman. It may be set in the purlieus of Kensington Palace Gardens and if not at the home of Thomas Gibson Bowles (1841-1922), the artist's first patron, it may where the first owner of the picture, Adriano de Murrieta, Marquès de Santurce, lived. The year after it was painted, the artist was himself wielding a rifle in earnest, as a sniper in the Siege of Paris by the Prussians.

Oil painting on canvas, The Crack Shot, by James Tissot (Nantes 1836 - Château de Buillon, Besancon 1902), signed bottom left: J.J. Tissot 69 [1869]. One of the finest pictures Tissot painted in England, it possibly shows the garden of Cleeve Lodge, the Hyde Park home of Thomas Gibson Bowles (1841-1922), the editor of Vanity Fair. Bowles had invited Tissot over to England to paint the magazine's chief backer, Colonel Burnaby (1869-1870; National Portrait Gallery); the bearded figure in the background may be a portrait of Bowles. Bought by Captain Bambridge in 1937. Gilt frame.