Buckingham Palace (before the Aston Webb Façade; 1913); an Open Carriage leaving the Palace 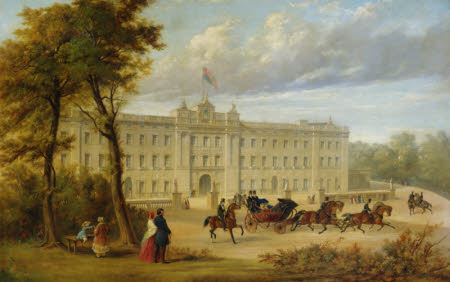 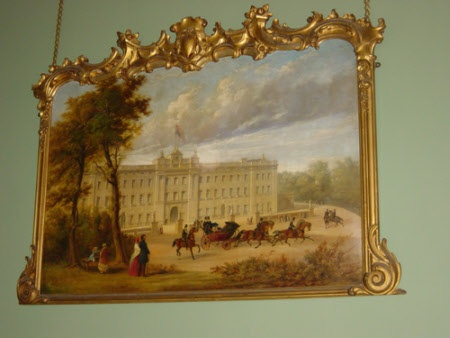 Oil painting on papier-mâché, Buckingham Palace (before the Aston Webb Façade); an Open Carriage leaving the Palace by Jennens and Betteridge, mid Victorian (see WIM/P/4,6,7). One of a set of four. The east front of Buckingham Palace is depicted, which was added to the Palace by Edward Blore in 1847. The façade of the east front was to be replaced in 1913 by the present Portland stone façade designed by Sir Aston Webb. The present Gates were also added at the same time. In view of the fact that the Royal Standard is still flying, it can be assumed that Queen Victoria is not in the carriage which has just swept out of the entrance to the Palace. The carriage in which there are two ladies, is driven by four horses, a groom sitting on each right hand pair, two liveried footman stand at the back of the carriage, and a man on a; horse rides beside the ladies. In front of the carriage which is turned to the right, are two further riders. There are two trees in the left foreground, to the right of them stand a man and a woman gazing at the carriage, between the two trees is a table on which a young child is seated, wearing a large-brimmed hat, to the right of the child is a young woman, wearing a three-quarter length skirt with lace pantaloons and a straw bonnet, who has her back go the spectator and is holding up her left hand to the child. The front of the palace is enclosed with a balustraded wall leading to plinths forming the entrance to the palace, on which are full-length statues.

Bequeathed by Elsie Kipling, Mrs George Bambridge (1896 - 1976), daughter of Rudyard Kipling, to the National Trust together with Wimpole Hall, all its contents and an estate of 3,000 acres