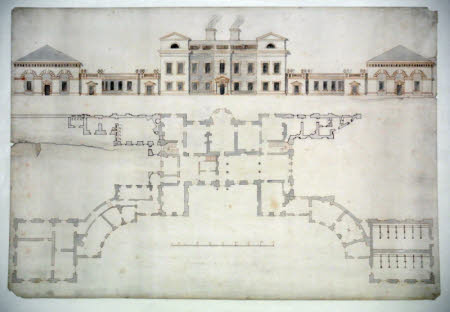 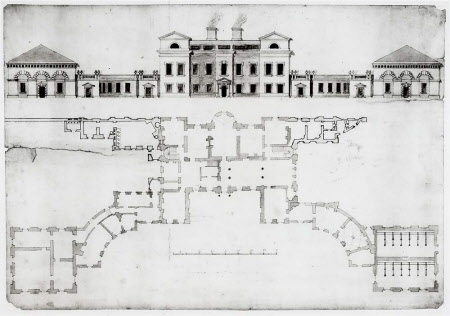 Normanton Park was designed by Henry Joynes (c. 1684—1754), and built between c.1735 and 1740, for Sir John Heathcote, the son of the wealthy merchant Sir Gilbert Heathcote (1651?—1733) who was both a co-founder of the new East India Company and the Bank of England and who was repeatedly satirised by Alexander Pope. In the poet’s Moral Essays he wrote: The grave Sir Gilbert holds it for a rule, That every man I want is knave or fool. The H plan house with its four outlying towers—antiquated in conception but dressed in neo-Palladian guise as a Roman villa rustica—at the centre of this drawing is Joynes’s work. Joynes’s design recalls Lord Burlington’s Tottenham Park, Wiltshire (1721), designed for Lord Bruce, and Sir Thomas Robinson’s Rokeby Park, County Durham (1725). Kenton Couse remodelled Normanton Park for another Sir Gilbert Heathcote between 1763 and 1767. He here proposes the addition of flanking pavilions—the right one providing stabling—and quadrant links containing offices. He also suggests the addition of further offices and service rooms to either side of the rear range. The highlighting of the new work with a strongly inked outline is unfinished. Couse’s additions are, in elevation, strikingly Burlingtonian in style, presumably in an attempt to marry with Joynes’s Palladianism. The drawing shows that the bow at the centre of the rear façade predates the further additions made to the house by Thomas Cundy senior (1765—1825) and junior (1790—1867). Couse perhaps brought this drawing to Wimpole for his own reference, or to show his new clients. Couse, who first worked at Wimpole as Henry Flitcroft’s assistant designed a new Dining Room, in the neo-classical style, for the house in 1778 (NT 206190). The Normanton drawing may alternatively have been lent by Sir Gilbert Heathcote who was Philip Yorke’s brother-in-law and who coincidentally bought the 1st Lord Hardwicke’s Grosvenor Square house when he died in 1764. After the auction of its contents in 1925, Normanton Park was earmarked to be ‘sold for demolition’, and demolition was its fate after first suffering a fire in 1925. Fifty years later its site and 6,000 acre estate were drowned beneath Rutland Water which, with a capacity of 900 million gallons, remains the largest manmade lake in Western Europe. Only the estate church, a bizarre sight, ‘waist deep’ in the banked gravel of the artificial shoreline, and the stable block survive above the level of the reservoir. Catalogue entry adapted from David Adshead, Wimpole Architectural drawings and topographical views, The National Trust, 2007