Proposal for the remodelling of the Hill House at Wimpole, Cambridgeshire, Plate III from the Wimpole Red Book 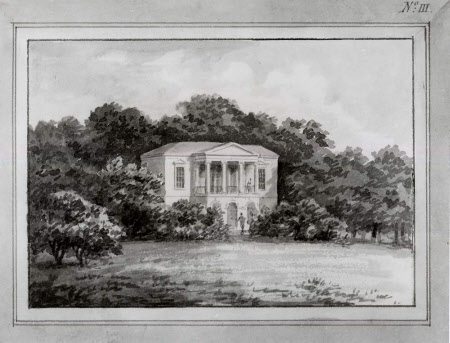 In the Red Book text, Repton criticises James ‘Athenian’ Stuart’s design for the Hill House and the way in which it had been constructed, suggesting how the building might be improved: 'The prospect room on the hill is in a state of decay / partly from its bad foundation and partly from the / absurdity of building a room on / Columns for which / there is no authority among the ancients. I am the more / surprised at this oversight, in an Artist to whom / this country must ever be indebted for his valuable and /accurate account of Athenian Architecture'. But Repton’s criticism went beyond any consideration of architectural precedent, he felt that the building should be given a purpose. Utility was one of Repton’s prevailing principles and one that the Picturesque Controversy simply accentuated. He advises: 'This beautiful knoll seems to require a building to be / placed upon it, but it is remarkable that either from the / swell of the ground or the trees in the valley, there are / very few spots from whence the lower part of this / building can ever be seen, and consequently the bases /of the columns are always invisible, while the heavy / mass above seems too mighty for its foundation as / indeed it has actually proved for it will be necessary to / take down all the centre of the building, except the roof / and cornice, which I think may be shored up till it is / restored and this I should advise to be done by filling / up the lower part to make a Labourer’s cottage, / without which a prospect room is seldom properly / ventilated, and the columns may than be removed to / the upper story in the manner described in the annexed / sketch No. III, in which I have also shewn the effect of / planting round its base and on the sides of the building / to correct its present isolated appearance'. Soane may previously have been called upon to consider the state of this building for in December 1797, he ‘survey’d the Summer House’ (Soane Museum Journal No. 3). The proposed remodelling of the central element of Stuart’s scheme, although perhaps a fairly standard neo-Palladian arrangement, recalls in a quite striking way the north and south elevations of the water house designed in the 1730s by the amateur architect Henry Herbert, 9th Earl of Pembroke, for the park at Houghton, Norfolk, a building which Repton would certainly have known. Repton’s aggrandisement of Stuart’s building was also to include the addition of triangular pediments to the first-floor windows. A few years later, Thomas West did prepare drawings for the addition of a cottage to the back of the Hill House, but his plans do not show how it was proposed to treat the front elevation[1]. The evidence of H.R. Yorke’s watercolour of 1836, made from a station point apparently between the columns of the building’s ground-floor loggia, strongly suggests that Repton’s proposal to replace them with an arcade and to move the columns to the upper floor was not undertaken. Catalogue entry adapted from David Adshead, Wimpole Architectural drawings and topographical views, The National Trust, 2007 [1] David Adshead, Wimpole Architectural drawings and topographical views, The National Trust, 2007, p. 107, cat. no.204