Proposal for remodelling the south façade at Wimpole Hall, Cambridgeshire 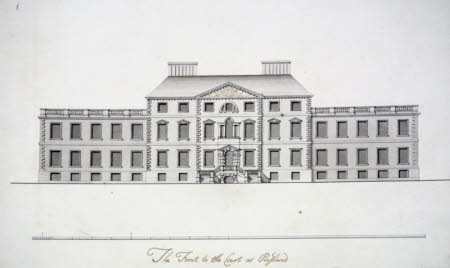 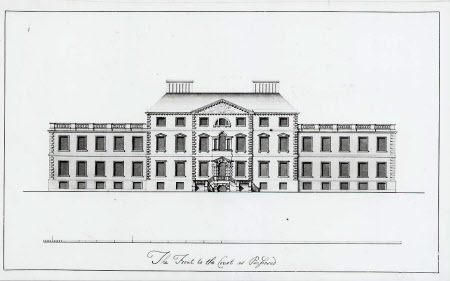 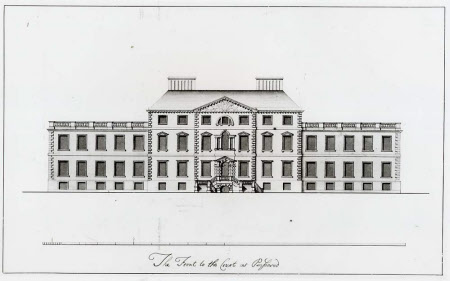 In the remodelling of Wimpole's principal front, Flitcroft's brief must have been to excise all vestiges of the architecturally arcane and unfashionable: the central tower and flanking two ­storey projections and the roof-top lantern would be swept away, while the vertical emphasis provided by the deep roof and tall chimney stacks would also be lessened. Pulling the face of the house forward to the plane of the flanking projections, Flitcroft added a pedimented three-bay centre, raised the attic storey (thereby reducing the apparent depth of the roof to the ridge), almost halved the height of the chimney stacks, and in addition removed the urns from the parapet balustrade of Gibbs's wings. At the centre of the composition Flitcroft proposed a 'tower' of neo-Palladian elements. At basement level a balustraded stair, supported by a low, powerfully voussoired arch - a ‘cryptoporticus’ that recalls William Kent's garden grotto and cascade designs - leads to a heavily rusticated doorcase of smooth bossed columns and an open pediment supported by giant diglyphs. Inigo Jones's interest in Mannerist gateways of the Doric and Tuscan orders is echoed here. Flitcroft, whom Colvin describes as a 'careful student' of Inigo Jones, drew out the illustrative plates for Kent's publication ‘The Designs of Inigo Jones’ (1727). In c.l748 Flitcroft almost exactly repeated his Wimpole doorcase design, but with a broader opening, as the entrance façade for the boat house he designed for the Duke of Cumberland's Great Meadow Pond in Windsor Great Park. Above Wimpole's new entrance, Flitcroft places a Serlian, or Venetian, window, and above that a Diocletian, or therm, window. This composition is associated with Burlingtonian Palladianism because of the single but influential occasion on which Richard Boyle, 3rd Earl of Burlington (1694-1753) employed it in the refacing of old Chiswick House (c.1723). This formula is thought, in spirit at least, to derive from Andrea Palladio's (1508-80) reconstruction drawings of the Baths of Caracalla, Rome, in which he showed open pediments of a therm character above serliana. In his 'Scheme of the Works propos'd at Wimpole', Flitcroft explains that the bricklayer (a Mr White) would 'take down the Court Front to the Ievell of the Ground and rebuild it, in a solid, and Workmanlike manner, with the Cross Walls, according to the Plan'. The mason (Mr Devall) would provide a 'Dorick Portico, and Bow window over it, with the Balustrade all of Portland Stone'. Catalogue entry adapted from David Adshead, Wimpole Architectural drawings and topographical views, The National Trust, 2007

Below scale: The Front to the Court as Proposed