Proposal for the remodelling of the north, or garden, façade of Wimpole Hall, Cambridgeshire 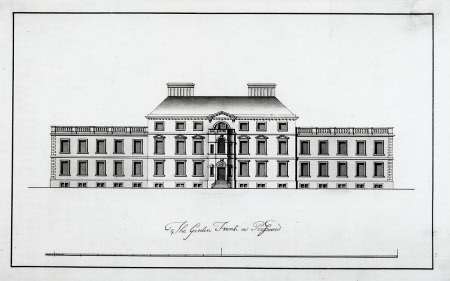 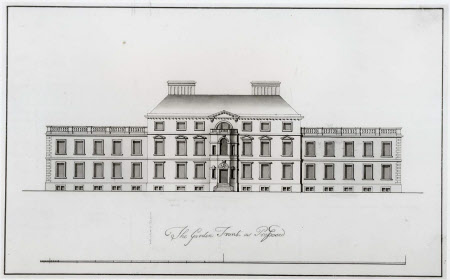 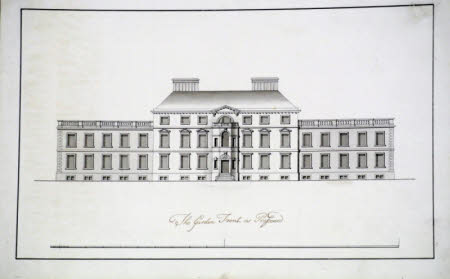 If Flitcroft made a survey drawing of the then existing north elevation, it has not survived. He here repeats the formula of a tower of neo-Palladian elements - Diocletian window over Venetian window over entrance door - but imposes it on and above a canted bay added to the centre of the house. It sits beneath a small, open pediment at eaves level, enriched with dentils and supported on brackets. The classical canted bay was used by Nicholas Hawksmoor at Panton Hall, Lincolnshire (c.1720) and was an idea taken up by architects such as William Kent and Roger Morris (1695-1749). Its use - for example in the recasting of the garden façade of Carlton House, Pall Mall, for Frederick Prince of Wales (c.1733), and in an unrealised library addition (c.1748) to the Duke of Cumberland's Great Lodge in Windsor Great Park ­ was to become a particular feature of Henry Flitcroft's work. In c.1750 the 3rd Earl Fitzwilliam commissioned Flitcroft to remodel his rambling, asymmetrically fronted Northamptonshire seat, Milton House; and in the refacing of its elongated south front, the architect placed a tower of Palladian elements at its centre and canted bays to either side. The component parts can all be recognised in his earlier work at Wimpole. The first Earl of Hardwicke's improvements may have spurred on his eldest son to employ Flitcroft at Wrest Park, Bedfordshire, where in 1760 he created a new dining room with a canted bay. At Wimpole, Flitcroft also appears to have added the five ­bay wing - or at least its façade - to the east, or left, of the central block. Prior to this, the northern face of the chapel would have been visible over the garden wall that linked the house and service wing, giving the garden façade of the house a decidedly unbalanced appearance. The addition may have been an afterthought for, other than as a sketchy, pencil emendation (NT 206207), it does not appear on the architect's plans. Flitcroft's written explanation, however confirms that the work was undertaken at this time. The bricklayer was 'To Build the Sham Front in the Garden with Butresses to D', while the mason was to provide '10 frames for blank Windows in the Sham Front'. Kenton Couse, Flitcroft's assistant, was later to finish this block and to build within it a new, neo-classical dining room (NT 206190). Catalogue entry adapted from David Adshead, Wimpole Architectural drawings and topographical views, The National Trust, 2007.

Above scale: The Garden Front as Proposed