Elevation and plan for a gothic eye-catcher at Wimpole Hall, Cambridgeshire 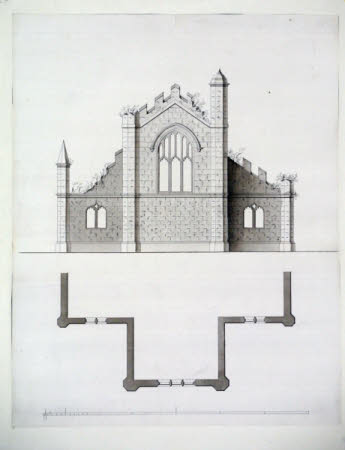 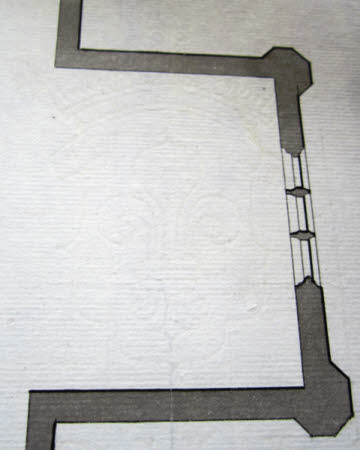 Pen and ink with grey wash on wove paper

Here attributed to Henry Flitcroft (Twiss Green, Cheshire 1697 – Hampstead 1769). Elevation and plan for a gothic eye-catcher at Wimpole Hall, Cambridgeshire, c. 1749, pen and ink, with grey wash (452 x 353mm), scale given, watermarked with a Fleur-de-lis in crowned cartouche above IVG.

It is not clear how this drawing, for a somewhat rectilinear and only very slightly ruinous eye-catcher, with octagonal corner turrets, crenellated parapet and a large window to the central, projecting bay, fits into the story of Wimpole's Gothic folly. Thomas Cocke has suggested that it may be by James Essex, who appears to have assisted 'Capability' Brown in the construction of the folly. Does it, however, have the spirit and scholarly plausibility that characterize Essex's work? If indeed it does date from the late 1760's or early 1770's, 'Capability' Brown might be considered a more likely author, for the drawing is not unlike his relatively pedestrian designs for garden buildings and lodges. The drawing is, however, more strikingly like those produced by Henry Flitcroft for the rebuilding of the church at Wimpole in 1748 - a matter of months before the Lord Chancellor's sudden enthusiasm for Sanderson Miller's tower at Hagley. The meticulous, hard-lined draughtsmanship, distinctive grey wash and shading, together with the characteristics of the scale bar suggest that Flitcroft, an otherwise dyed-in-the-wool neo-Palladian, might be its author. The wove paper and watermark are identical to those of Flitcroft's survey drawing of the medieval church. Is it possible that this scheme for a Gothic stage flat is a precursor to Miller's scheme for a castellated folly, and that the idea of an ornamental ruin suggested itself when the greater part of the parish church was demolished, and quantities of time-worn clunch and dressed and carved stone became available? Certainly we know that Miller was to have had the use of the stone from the 'Old Church in the Parish'. By the mid-eighteenth centrury, ecclesiastical fragments mined from ruined abbeys and abandoned churches were often incorporated in garden and park buildings and valued for their romantic effect. The building of mock-ruinous churches was somewhat rarer, but precedents and parallels can be found in the gothic facades and screens built at Shotover, Oxfordshire, for James Tyrrel; at Fawley Court Buckinghamshire, for John Freeman before 1732 and at Shobdon, Hereford, where major elements from the demolished Norman church were recycled to create the hill-top arches. Having seem Miller's powerful, castellated folly at Hagley, Hardwicke may have decided that he could do better than erect this Carpenters Gothic proposal. Catalogue entry adapted from David Adshead, Wimpole Architectural drawings and topographical views, The National Trust, 2007.

fleur-de-lis in crowned cartouche above IVG