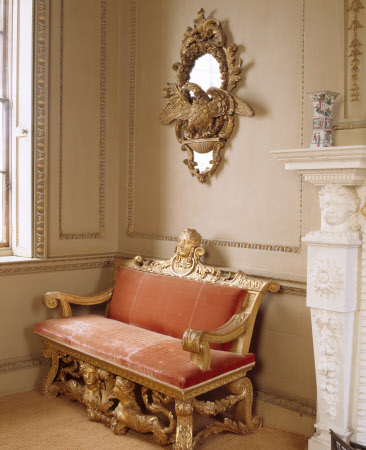 One of a pair of William Kent settees with carved gilt arms, and 'S'-scrolled legs united by garlands of oak leaves and sprays of acanthus, the front frieze decorated with a central acanthus leaf and two sphinx figures. The top rail is surmounted by a carved female head (representing the goddess Diana?). The detailing typifies Kent's eclectic mix of ancient motifs.

The design of this gilt settee is among William Kent’s most celebrated compositions, embodying all that is “Kentian,” as his style came to be known. Gloriously three-dimensional, it typifies Kent’s eclectic mix of ancient motifs. A central mask of a woman, possibly the Roman goddess of the hunt, Diana, sits on the crest of the settee’s back, acanthus scrolls embellish the arms and legs, and two large-scale sphinxes support the seat. Kent used these motifs and details on several of his most spectacular pieces, such as the side table with sphinx supports in the saloon at Houghton Hall, country seat of Robert Walpole, Britain’s first prime minister. Sphinxes are also included in an engraved tailpiece by Kent for Alexander Pope’s translation of Homer’s Odyssey (1725–26). For details on Provenance see History tab,

The settee is one of a pair, long thought to have been copies of Kent-designed settees from Wilton House, Salisbury, purposely made for its Double Cube Room. Recent scholarship, however, has revealed that they are not copies but original Kent works made before 1731 for Wanstead House in Essex, rather than Wilton. Wanstead, an early eighteenth-century Anglo-Palladian country house, had been commissioned by Richard Child, Viscount Castlemaine, and designed by Colen Campbell, one of the premier architects of his day. Its construction was completed by 1725. Kent provided furnishings and painted ceilings for the celebrated interiors. The house was demolished in 1824, but we catch a glimpse of Kent’s contributions in William Hogarth’s painting of the ballroom, The Assembly at Wanstead House (1728–31), which is also in the William Kent exhibition. The painted ceiling and several pieces of furniture are by Kent, including one of the sphinx settees visible on the right in the painting. Peter Brown, Director of the York Civic Trust, identified the settees at Wilton and Rievaulx as those Kent designed for the ballroom at Wanstead. Two years before Wanstead’s demolition, there was an historic sale of much of the contents of the house, and Kent’s work was widely dispersed. The sale catalogue lists eight settees in the Grand Ballroom, each one “an elegant square settee, in superb massive carved and gilt frame, with scrolled elbows, the back stuffed in costly crimson Genoa velvet, and squab to correspond, on scroll legs, the frame ornamented with mermaids [sphinxes], and festoons of flowers.” There were three buyers, likely to have been agents or dealers, who must later have sold their settees: their names appear in an annotated copy of the catalogue as French, Davis, and Jarman. Six settees were subsequently acquired by Catherine Woronzow, the Russian wife of the eleventh Earl of Pembroke, for her refurbishment of Wilton House in the 1820s. They are there today. The other two, including the one on loan to the exhibition, are now in the Ionic Temple at Rievaulx Terrace in Yorkshire. They were probably bought in the twentieth century, sometime between the two world wars, by Lord Feversham for Duncombe Park, where they were placed in the Temple around 1957. (Copy by Susan Weber for the 2014 catalogue for the exhibition William Kent: Designing Georgian Britain.) Transferred to National Trust from Treasury in lieu of estate duty in 1972