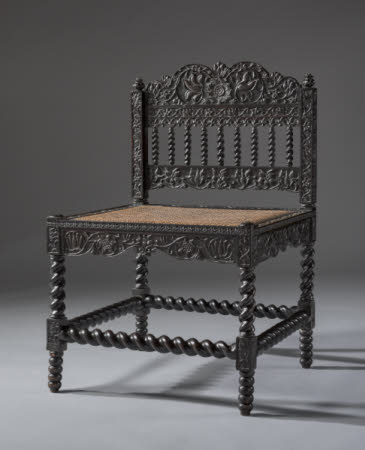 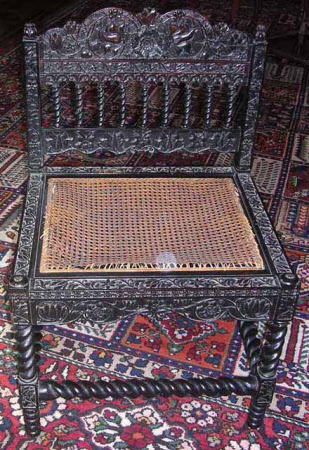 A chair, or backstool, one of a near pair of carved ebony chairs, Coromandel Coast, India, circa 1640-60. The the cane seat 20198.1.2. The arched and shaped cresting carved with lotus flowers around a central rosette, above an arcade of nine spiral-turned spindles topped by leafy capitals, all between square-section rear uprights topped with floral spindles. The cane seat in in flower-carved seat rails, and raised on block- and spiral-turned legs joined by conforming foot stretchers. Profusely carved throughout with flowers and leaves on scrolling stalks. The bobbin-turned feet replaced.

Chairs like this of carved and turned ebony were made in south-eastern India, in states bordering the Bay of Bengal on what is now called the ‘Coromandel’ Coast. Rich in natural resources, the area attracted European trading interest from the middle of the 17th century and this led to the emergence of a market in carved ebony furniture – heavily influenced by Dutch fashions – of which there are several examples in National Trust collections. These chairs are an interesting amalgam: the form, particularly the spiral-turned legs, is typically European, but the carved flora and fauna are species indigenous to India and their abundance on these chairs typical of the 17th century Indian aesthetic. There are six of this type of chair at Tyntesfield (this is the only open armchair), a house remodelled and furnished with a fortune amassed by William Gibbs (1790-1875), ‘the richest commoner in England’, directly from the Peruvian bird guano fertiliser industry, an industry where Chinese workers, convicts, conscripts and army deserters, were employed in terrible conditions and had a short life expectancy. Chairs made of ebony in India have been recorded in English inventories since the mid-18th century; how this chair entered the Gibbs collection is not clear. It has been said that no other group of ‘Indo-European’ furniture has been as misunderstood as this one. In England, they were made fashionable by Horace Walpole (1717-97), who believed that they were English, and even in the 20th century chairs of this type were being described as ‘Jacobean’ or ‘Indo-Portuguese’. The recent revival in scholarly interest in Indian furniture, however, has shown (using inventories of the Dutch East India Company) without doubt that the Coromandel Coast was the centre for production. Later examples were made in Sri Lanka and Jakarta, Indonesia.

Purchased from the estate of the late Lord Wraxall with the assistance of the NHMF and donations from members and supporters.