A Shepherd before a King 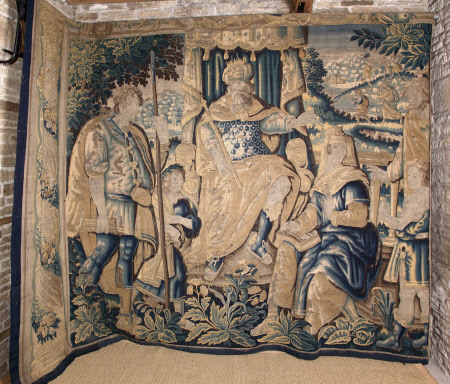 Tapestry, wool and silk, A Shepherd before a King, probably Oudenaarde, c. 1650-1670. On the left a king sits enthroned under a canopy, wearing a crown and a turban and a yellow cloak over blue scale armour and greaves. He holds a sceptre in his right hand and gestures with his left. To the left there is a young man in simple dress, holding a shepherd’s crook and a set of pipes, and a young boy wearing a laurel wreath. To the right of the king a woman sits writing in a book, and on the far right is a bearded man and a child. The king seems to be looking at the shepherd and gesturing towards the bearded man. On the right directly behind the seated woman there is an object resembling a table, and in the background a distant landscape with small figures. There is a border on the left hand side in the form of a twisted Solomonic column. Only a narrow strip remains of the upper border, and there is no lower or right hand border.

The subject of the tapestry has previously been described as ‘Ulysses departing from Ogygia’, but this seems unlikely. Ogygia was the island inhabited by Calypso, who made Ulysses stay with him for seven years as her lover, but no king appears in the story. Moreover Ulysses is usually represented as a warrior, whereas the attributes of the man on the left of the tapestry at East Riddleston specifically mark him out as a shepherd. The subject may instead come from an Old Testament story. On the basis of style and colouring the tapestry can be attributed to the town of Oudenaarde. (Helen Wyld, 2013)