Part of an Anglo-Saxon stone cross 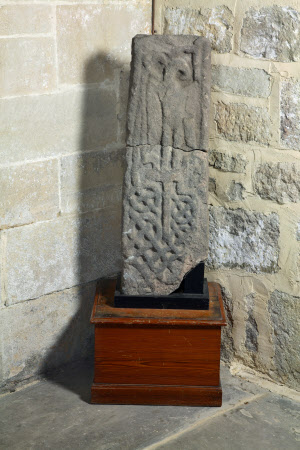 Two parts of the top of the shaft of an Anglo-Saxon carved stone cross. Front and sides carved with interlace pattern, with bird on perch in centre of the top section. Blank rear. Probably depicts an eagle, symbol of St. John the Evangelist (or sometimes Christ). An alternative suggestion is it shows the pelican in her piety (i.e. a pelican reviving her young with blood pecked from her own chest, an early allegory for Christ). A relatively crude example of late Anglo-Saxon carving (9th to 11th century) found across Northumbria and Mercia and likely evidence of East Riddlesden as the site of an Anglo-Saxon estate . See article by Elizabeth Coatsworth (MMU) in Durham Archaeological Journal Vols 14-15 (Transactions of the Architectural and Archaeological Society of Durham and Northumberland) 1999, p107-110

Base section found in grounds (possibly under the drive way) of East Riddlesden in 1959 and top found built into a wall surrounding the cellar in 1987.