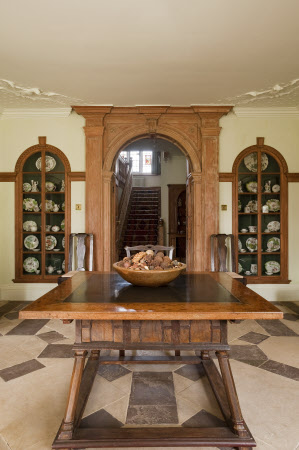 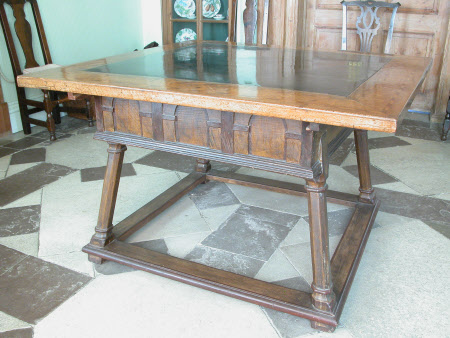 This oak card table is inlaid with a German inscription which reads: ‘Felix Brunner had me made in 1584, in this house I must remain.’ You could be forgiven for thinking it’s an ancient family heirloom but in fact this is something of an elaborate hoax. Sir John Tomlinson Brunner (1842-1919), was a great Liberal industrialist and son of a Swiss Unitarian minister, who moved from Bülach to Liverpool in 1832 to establish a school. Unlike his father, Brunner joined the world of commerce, co-founding the chemical works of Brunner Mond & Company in 1873 and became so successful, The Times dubbed him the ‘Chemical Croesus’. Coming from a Unitarian immigrant family, Brunner could not boast fine furniture and paintings that exhibited a long and successful lineage but he was keen to build such a collection. As his wealth grew, he employed genealogists to research his family tree, while turning to fellow Swiss and keen antiquarian, Heinrich Angst, to source objects which displayed the Brunner crest (or as close as he could find). This table, along with other antiques found by Angst, was inherited by Brunner’s grandson, Felix, who bought Greys Court in Oxfordshire in 1937. By a quirk of fate he shared the name of the person who commissioned the table in 1584. Although Brunner gained the respect of the British establishment for his industrial endeavours he had an underlying sense of being a second generation immigrant and an outsider. He would no doubt have been pleased that future generations of his family became very much part of the establishment. His great granddaughter, Katherine Worsley, married into a very illustrious ancestral heritage when she wedded Prince Edward, Duke of Kent in 1961.

Card table with walnut top on oak frame. Top inset with black slate slab, walnut surround with the Swiss-German inscription: 'Felix Brunner Lies Machen Mich 1584 in dis hus horren ich darum'. This translates as "Felix Brunner had me made in the year 1584 in this house I must stay". Four canted chamfered legs.

Gifted to the National Trust by Sir Felix and Lady Elizabeth Brunner, along with Greys Court House and Estate, 1969.