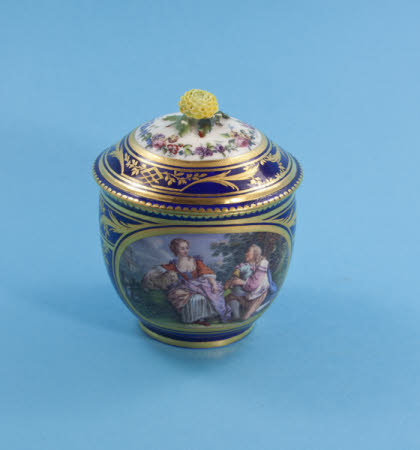 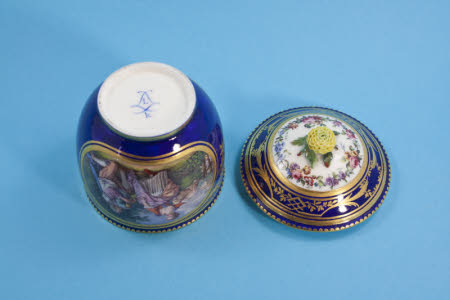 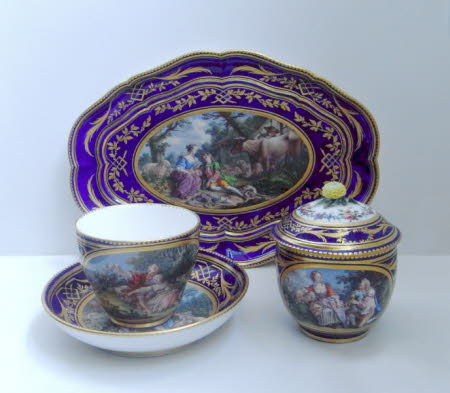 George, Sixth Earl of Coventry was passionate about furnishing his houses. He succeeded to the Earldom in 1751, employing ‘Capability’ Brown to improve the landscape at Croome in Worcestershire, and to encase his existing Jacobean house in a new Palladian mansion. By 1760 the house was ready to furnish, and Lord Coventry commissioned the architect Robert Adam to design much of the interior decoration and furniture. Lord Coventry also spent handsomely on acquiring decorative arts for the purpose of display at Croome. He was one of the first to visit Paris at the end of the Seven Year’s war (1756-63) where he commissioned tapestries from the Gobelins manufactory. He also made many magnificent purchases of highly contemporary French furniture, clocks and gilt bronzes, and – as his personal papers and bills attest – he was an exceptional early English patron of Sèvres porcelain. Bills from a trip to Paris in 1764 show a great spending spree on clothing, lace cuffs, cosmetics, and most extravagant of all, this Sèvres breakfast service, purchased for the vast sum of 720 livres. The service, known as a déjeuner ‘du roi’, has a striking blue ground and consists of a plate, cup and saucer and a sugar bowl. The exorbitant price of this service can perhaps be justified by the superbly painted pastoral scenes by Charles-Nicolas Dodin. Dodin was the most skilful porcelain painter of his day and counted Madame de Pompadour, Louis XV and Catherine the Great among his clients. Until this date the most expensive déjeuner ‘du roi’ to be identifiable in the Sèvres sales records appears in Madame de Pompadour’s inventory in 1764. As Madame de Pompadour died on 15 April 1764 before the piece was completed it is tempting to suggest that Lord Coventry’s exceptional service was originally intended for her. Lord Coventry’s passion for French decorative artists culminated in his furnishing of Croome Court, where he combined his Gobelins tapestries with furniture designed by Robert Adam including a stand to show off a Sèvres jug and basin purchased in 1767 and made by the leading English cabinet makers Mayhew and Ince. The survival of all these elements of his patronage enables us to celebrate his sheer panache and flair for a project, making it all the sadder that many of the contents of Croome were dispersed from 1948 onwards when the family was forced to sell the house. Fortunately, thanks to the efforts of the Trustees of the Croome Estate and the National Trust many of the wonderful pieces collected by Lord Coventry are being brought back to the house where they were first intended to be displayed almost two-hundred and fifty years ago. (Text adapted from Rosalind Savill,'The Sixth Earl of Coventry’s Purchases of Sèvres Porcelain in Paris and London in the 1760s’ in The French Porcelain Society Journal, Volume V, 2015.)

Sugar bowl ('Bouret'), part of a Sèvres tea Service (déjeuner 'du roi’), soft-paste porcelain, 1764. The service consists of a plateau ‘du roi’, a cup and saucer ‘Hébert’ and sugar bowl ‘Bouret’; it has an overglaze-blue (bleu nouveau) ground enriched with gilt foliage and pastoral scenes after François Boucher painted by Charles-Nicolas Dodin. The choice of scenes was probably selected for Dodin's use by Jean Jacques Bachelier, artistic director (directeur artistique) at Sèvres. Dodin had been painting plaques with figure scenes since 1760, particularly for Madame de Pompadour, and this exceptional service may have originally been for her but was not completed before her death on 15 April 1764. The service was purchased by George, Sixth Earl of Coventry during a three-week visit to Paris in August to September 1764.

Made by the Sèvres Porcelain Manufactory (est. 1756) in 1764. Loaned to The National Trust by The Croome Heritage Trust in December 2007

Interlaced Ls enclosing L the date letter for 1764, and K for the painter Charles-Nicolas Dodin.

Rosalind Savill, 'The Sixth Earl of Coventry's Purchases of Sèvres porcelain in Paris and London in the 1760s', The French Porcelain Society Journal, Volume V, 2015., pp. 136-7