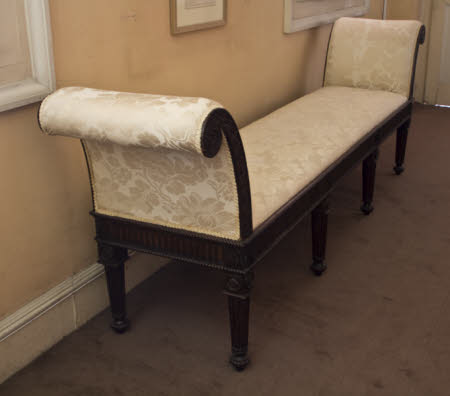 An early George III mahogany window seat, one of an important pair, after a design by Robert Adam and supplied by France and Bradburn, carved by Sefferin Alken, the scroll ends carved with anthemion, the fluted seat frame with beaded and gadrooned borders on turned fluted legs, the seat upholstered in floral ‘gros-point’ and ivory damask. See also National Trust Inventory Numbers 170951.1.1, 170951.2.1 and 170951.2.2

Supplied by France and Bradburn after a design by Robert Adam and carved by Sefferin Alken. Loaned to The National Trust by The Croome Heritage Trust in December 2007.