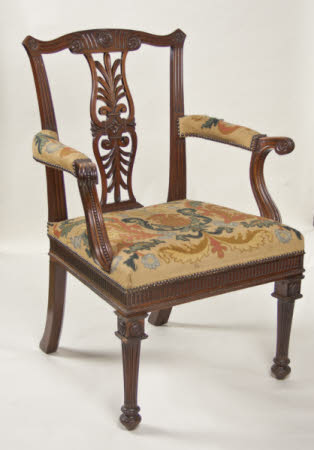 An early George III mahogany large elbow chair, one of an important set of eight, after a design of Robert Adam and supplied by John Cobb, some of the carving by Sefferin Alken, the centre upright panel to the back carved and pierced with anthemion motifs and fluted uprights, the toprail carved with paterae, the moulded arms with beaded borders, fluted seat frame on fluted tapering legs and turned feet, the seat upholstered in floral gros-point worked by George William Reginald Victor Coventry, the 10th Earl of Coventry (1900-1940); re-railed.

Loaned to The National Trust by The Croome Heritage Trust in December 2007.