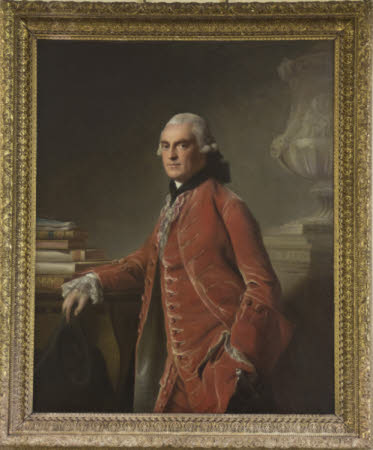 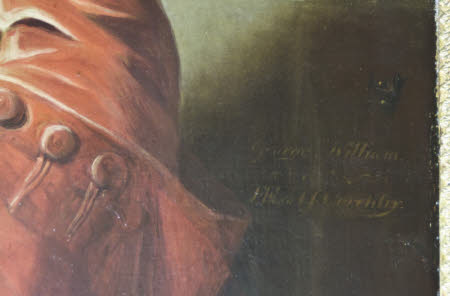 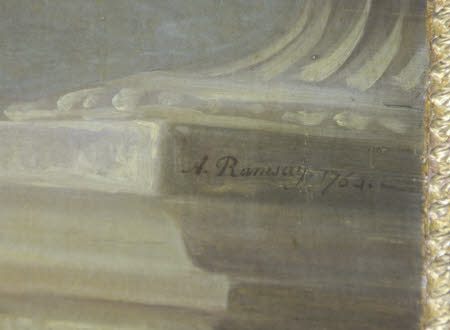 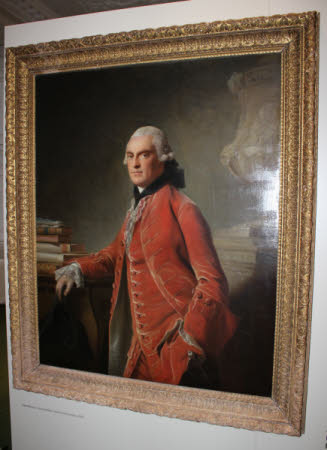 Oil painting on canvas, George William Coventry, 6th Earl of Coventry (1722-1809) by Allan Ramsay (Edinburgh 1713 - Dover 1784), signed and dated ‘A. Ramsay 1764’ on the base of the urn and with identifying inscription ‘George William/6th Earl of Coventry’ (on the base of the column). A three-quarter-length portrait of the 6th Earl of Coventry, turned to left, facing, wearing a red velvet suit, white shirt with lace cuffs and collar and a black satin bagwig. Holding in his right hand a black tricorn hat, Coventry leans on a table supporting a stack of books; to his left is a pedestal-mounted marble urn. A red chalk study for the urn, presumably first used by Ramsay for his portrait of Augusta, Princess of Wales, is in the collection of the National Galleries Scotland (acc.no. D.1856); the urn itself appears to be one of a pair which now stand on the East Terrace at Windsor Castle (RCIN 71445). In an exceptional carved giltwood frame after a design by Robert Adam. Ramsay's bill for this portrait remains at Croome Court: 'Allan Ramsay September 28th 1764 Half-length of his Lordship by me £52.10.0.'. The composition is repeated exactly in Ramsay's portrait of William Charles Colyear, 3rd Earl of Portmore (1747 - 1823) at Penrhyn Castle (NT 1420352).

By family descent at Croome; on loan to the National Trust by The Croome Heritage Trust since December 2007